The Hand of the Hunter (an excerpt)

Janina Vannoy teaches high school choral music in the little village of Guildford in upstate New York.  Her quiet life, however, hides a tumult from the past; when she was twelve, she was the first on the scene when her next door neighbor, Tom Christian, was murdered.  Tom's wife, the elegant Kathy Christian, was arrested for the murder, but was found not guilty by reason of insanity, and was committed to an institution.  But was Kathy really guilty?

Janina becomes obsessed with trying to piece together the details of what happened twenty-five years earlier, and becomes aware of gaps in her own memory of the events -- especially anything having to do with the mysterious Justin Lazarus, who appeared in Guildford shortly before the murder and vanished immediately afterward.  Very quickly, Janina discovers that the most important thing is not discovering whether Kathy killed her husband, but to determine the answer to one question:  who was Justin Lazarus? 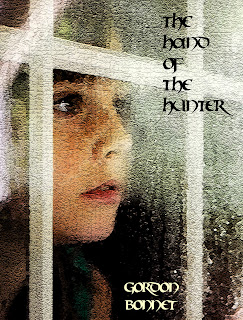 The Hand of the Hunter takes Janina through two parallel timelines; her search for the truth in 1996, and her witnessing of the actual events in 1971.  Below is an excerpt from The Hand of the Hunter, which is available for download from Barnes & Noble.  In this scene, Janina as a ten-year-old is sitting under a tree in a park, trying to make sense of a frightening encounter between her mother and Justin -- and to her alarm, Justin finds her there.

"What did you do to my mother?" Janina said, her voice still high and squeaky.  "Did you hypnotize her or something?"

Justin's smile faded.  "What are you talking about?"

The rest of his smile dropped away.  "I didn't hypnotize her," he said, his voice sounding inflectionless and weary.  "I just turned her thoughts away, into a different track."

"Because she wanted to ask me questions that I couldn't answer."

Janina considered this.  "Well, anyway, what do you want?  I know it isn't just to say hi.  You're a terrible liar."

The smile broke out again, sweet as sunshine after rain.  "I know."

"I wanted to talk to you.  Look," he said, parting the fir branches and stepping inside, and hunkering down beside her.  "You ask me how I know these things sometimes?  Well, I know I can trust you.  Don't ask how, I just know.  And I'm here to ask you for a favor."

"I already gave you one."  She scowled at him.  "I promised not to tell anyone about you.  And I haven't, either."

"I know.  This is a bigger favor."  He looked at the ground.  "I wish I could explain everything to you, but it wouldn't be safe.  For me or for you.  But I'll tell you this; I'm in a lot of trouble.  Not trouble like you'd usually think of -- but I'm in danger, bad danger.  And I'm afraid that other people might get hurt.  I have to leave, soon.  All I'm asking you is this."  He reached out his hand, and touched Janina's forehead.  Quite suddenly, her hazel eyes went blank, and the taut muscles in her face relaxed.  The angry scowl smoothed away.  She looked as expressionless as a doll.

Justin moved his face close to hers, and his voice dropped to an almost inaudible murmur, like the wind in the fir branches.  "I may need help.  It may be soon, or it may be later, much later.  All I'm asking is that if I need help sometime, you'll try to help me.  I swear to you that I am not trying to hurt anyone.  I've never wanted to hurt anyone.  But I've been alone for a long time, and I need someone who I can count on to help me when the time comes.  Will you do that for me, Janina?  Wait, and listen, and help me when I need your help?"

Without blinking, almost without moving, Janina whispered, "Yes.  I will help you."

"Good.  Thank you."  He touched her forehead again, and she blinked, and looked confused for a moment, and then looked up at him.  The scowl returned, but there was a measure of ambivalence in it now.

"What's that you got?" he asked brightly.

She looked down at her hand, still holding the partially eaten graham cracker, and frowned.  He laughed, and pointed.  "No, that, silly."

He picked it up, smiled, and said, "You like music?"

Even her distrust of Justin couldn't mask her intensity on this topic.  "Yes."  The word came out like a plea.

"When I was growing up, there was always music.  If you know what station to tune in to, you can sometimes find music like it on the radio.  Let me see."  He began to turn the tuning dial.  There was the familiar static and blips of other radio programs, and then, spilling out from the little speakers, was the most beautiful music she had ever heard.  It surpassed even the classical music of two days ago; it was as if the stars and the sun themselves had acquired voices.  It brought tears of sweet, painful joy to her eyes.  Justin smiled at her, a little sadly, and set the radio down on the soft, needle-strewn ground, and was gone.

The music ended after minutes or hours -- Janina could not be sure which it was -- without any announcer's voice to give it a name.  Silence followed it, many minutes of silence broken by nothing but the wind, the birds, and the voices and laughter of the two boys playing frisbee.  Finally, when she was sure that no more music was forthcoming, she picked up the little radio and looked at it.

The radio's switch was set to "off."  Somehow she knew it would be.  When she switched it on, she was greeted by a crackle of static that seemed to her to be the most empty, despairing sound she had ever heard.  There was a dry little click as she shut it off.  Then, still clutching the radio in her hand, she wept bitterly.
Posted by Gordon Bonnet at 6:02 AM