Imagine you're 61, and you have lived all your life severely nearsighted.

Ida Peck has never seen the world except through thick glasses.  If she's awake, they're perched on her nose, and she lives in perpetual fear of losing them.

Then her friend, Leonie Williams, tells her about laser surgery, and despite some misgivings, she has it done.  And it works... perhaps too well.

Because now, with her vision restored, Ida has peripheral vision for the first time in her life.  And to her alarm, she begins to see things out of the corner of her eye.  Things that no one else can see.  Her doctor and her friends tell her that it's completely normal, that it's nothing to worry about; these things aren't real.

Unfortunately for Ida, they're very wrong about that... 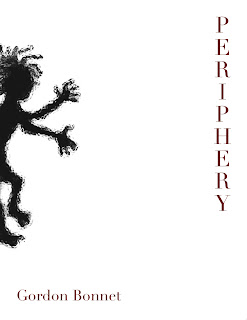 Below is an excerpt from my novella Periphery, which is available through Barnes & Noble.

Bertha smiled a little.  "No, Leonie, I've never known Peck to lie.  You can just put your claws back in and relax.  But that don't mean that some shadow she saw pushed me down the stairs.  It might have looked that way," she added quickly, as Leonie opened her mouth to respond.  "But looks don't mean real.  Leastways, that's what my mama always said."

"I saw it, Bert," Ida said, almost apologetically.  "I saw it push you.  It's following me around.  Ever since I touched it."  She looked over at Leonie, for a little moral support, and Leonie nodded.  Evidently, any misgivings Leonie felt were submerged under several feet of loyalty.  Heartened, Ida added, "None of the other things I've seen have been doing that."

Leonie rolled her eyes, and gave Ida a now why the hell did you bring that up? look.  Ida gave a little shrug, and said, "Well, a couple of other things.  Out of the corner of my eye, you know.  But none of them have gone... gone real the way this one has."

Leonie took a deep breath.  "Look, Bertha, you know Ida's telling the truth.  You said yourself you hardly ever fall down, you felt like something pushed you.  And Ida felt it bite her finger.  Whatever you say, she's not lying, you know she's not."

"Yes, Leonie, I know she's not lying.  But you have to admit, it's a big mouthful to swallow."

"I'm glad you did.  And as strange as it sounds, I do believe you.  I saw your face when you saw it in my living room.  That wasn't the face of someone making something up.  So don't worry, Peck, I'm not going to call the men in the white jackets."  Bertha gave Ida a wry grin.  "But I'm going to watch my step when you're around, just the same."

Ida sighed deeply; just having her two best friends believe this crazy story made it somehow easier to bear.  She looked toward the dark window, and it was almost with a feeling of expectation that she saw the little man crouching against the wall in the corner of the room.  He was perfectly motionless, his mouth still stretched in an impossibly wide grin, his blunt, squarish teeth showing down to the gums.  Just sitting there, watching them.

Leonie grabbed Ida's arm, but Ida didn't move; she kept her eyes fixed on the window.

"Yes," Ida said, quietly, without turning toward her.  "Over in the corner, to the right of the window."

There was a pause.  "There's nothing there," Leonie said.

"Yes, there is," Ida said, still staring straight at the window.  "I can see it."

There was a creak, as Leonie stood up, and she walked toward the corner of the room.  "Honey, there's nothing there."

There was a subtle change in the little man's face; his tiny eyes glittered dangerously, and the grin became a leer.  His long, thin arms moved slowly, the fingers flexing.

Before Ida could react, Leonie reached out and put her hand flat against the wall, where the man's chest was.  Three things happened, nearly simultaneously.

Ida shouted, "Leonie, don't!" and whirled to face the corner.

Leonie said, "It's cold!" and then shrieked, pulling her hand back.

The figure of the man vanished.

Leonie stood there, dumbly looking down at her right palm, which was cradled in her left.  She turned toward Ida, breathing hard, and rotated her hand toward Ida and Bertha.

And Leonie's eyes rolled upwards, and she collapsed in a dead faint.
Posted by Gordon Bonnet at 10:45 AM