We All Fall Down (an excerpt)

It is 1351, and the Black Death has ravaged England. Whole villages have been erased, their inhabitants slain by the plague. Survivors pick up the pieces, try to put what is left of their lives back together, all the while questioning how God could have let such a thing happen.

One of the survivors, Nick Calladine, who had been a member of the guard in a little town in Derbyshire, sets off wandering across the ravaged countryside, trying to find others like him. He comes across four survivors in the guardhouse in Glossop, a village up in the moorlands. But when one of the four dies under mysterious circumstances, and suspicion falls on the others, Nick has to rely on his powers of deduction to prevent another murder -- which next time might be his. And as he is drawn deeper and deeper into the history of the three men who survived -- the simple and superstitious Adam Holden, the dark, gloomy Tom Upstone, and the happy-go-lucky but brilliant womanizer Will Fletcher -- he finds out that all three of them have secrets in their past, that when put together, add up to murder.

We All Fall Down is available as an eBook from Amazon and Barnes & Noble. 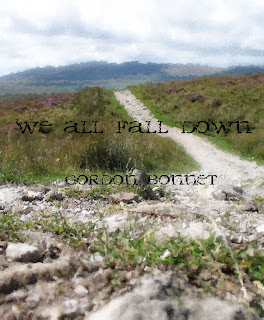 In this passage, it is the evening of the Nick's arrival at the Glossop guardhouse.  Night has fallen, and Nick and Tom are headed to the sleeping quarters after a disquieting conversation.

I opened the middle door, and carrying a lamp, I went in ahead of Tom.  He followed, his footsteps on the heavy plank floor strangely silent.  There were ten decent straw mattresses on the floor, in two rows of five each, and the room seemed less damp than the store room did, so I had no doubt we'd pass the night in relative comfort.

I had a light wool blanket in my satchel, but it was a warm night; I spread the blanket across the rough straw, stripped off my shirt, and fashioned it into a small pillow.  I pulled off my shoes, and set them next to the bed.  I extinguished the lamp and then lay down on my back, cupping my hands behind my head.  I had through to puzzle over the day's occurrences, and the different personalities of my three new comrades, but fatigue overtook me within minutes, and I dropped into a dreamless sleep.

It was still completely dark when I awoke.  I glimpsed a crescent moon through the small window high in the east wall, but even so it was dark enough that I could barely see my hand in front of my face.  I heard no sound from the bunk at the other end of the room, where the strange, grim Tom Upstone was sleeping.  I lay there, wondering what had awakened me, as the night was quiet and there was not even the faint trilling of crickets to break the silence.  That by itself was strange.

There was a sudden flash of light through the low window on the north wall of the room; greenish light, like no healthy flame would ever be.  It was like nothing I had ever seen before, but was just as Adam had described it.  Too slow for lightning, and there was no thunder; just irregular flashes of light, mostly green, but sometimes bluish or reddish.

They are the candles of the Airy Men...  Bad things happen to people who get caught near Bleaklow Tor at night, especially when the lights come.

I suddenly wondered where Wat was.  If he had arrived after I fell asleep, he would have then wanted to go to bed himself.  Perhaps he usually slept in the same quarters as Adam, but it sounded like Adam had blocked the door.  Wat would have had no choice but to force his entrance or to join us in here, and I doubt I'd have slept through either one.

Still, I had been tired, and he might have entered quietly.  I did not want to light a lamp to check, and in any case, there was something about the shimmering lights coming in through the window that made me want simply to lie still and pray for it to end.  There was nothing overtly frightening in the lights themselves, other than their being unlike anything I'd seen; but they aroused in me a fear that even Adam's childish stories of the Airy Men were not sufficient to explain.  I account myself a brave enough man, but lying there, I felt that no power on earth would have induced me to go outside, or even to get up and walk to the little rectangular window in the back wall and peer out toward the north, the direction from which the lights came.

The flashing began to taper off, after perhaps twenty minutes; there was a succession of reddish flashes, then pause of perhaps five minutes, then a long, low, bluish glow.  Then all was dark.  Throughout this whole time, there had been no sound.  But once the blue glare faded from the north window, to be replaced by the wholesome blackness of night, one cricket in the distance began to trill, soon followed by others, and within a few minutes there was the typical night's chorus.

And that's when I heard another sound.  It was a horrid, low moaning, a sound more animal than human, followed by a dull thump.  Gooseflesh stood out on my arms and shoulders.

I have said that I think of myself as a brave man, but what I did that night is far the bravest I've ever done.  Before, lying in bed watching the spectral lights, I had felt that nothing could have persuaded me even to go to the window; but now, hearing the moan of some poor man or beast in mortal fear, I could not simply lay by and do nothing.

I stood, still clad in nothing but my trousers, and went to where the lamp sat; I took a flint and after a little struggle lit the wick, and then padded barefoot to the end of the sleeping quarters and opened the door into the common room.

The common room was empty.  I made a complete circuit of the room, allowing the little lamp flame to illuminate each corner, and there was neither man nor animal in the room from which the sound could have come.

Heart pounding, I went to where the outside door stood, and tremblingly reached out to the handle.  I pulled it, and it swung open, creaking on its great iron hinges.

Lying just outside the door was a man.

I had seen dead men aplenty in the days previous, but there was something in this man's aspect which terrified me more than all the bodies of the plague victims, whose poor corpses had aroused in me nothing but pity.

He was my age, perhaps a year or two older, with cropped light-colored hair.  He lay full on his back, but in death he had found no peace; his eyes were staring, staring in horror up at the empty sky.  A lumpy cloth bag lay fallen to one side.  One of the man's arms was flung up across his face as if the last thing his dying eyes had beheld had been something so terrible that he could not bear to look at it, and his final gesture had been to try to block it from sight.

One look at his wide eyes, glittering in the lamplight, was enough to tell me that he had failed.
Posted by Gordon Bonnet at 5:03 AM