The Conduit (an excerpt)

Ryan Linahan lived an ordinary life as a high school biology teacher, until Great-Uncle George Parker died. While helping his family to go through all of Great-Uncle George's belongings, Ryan discovered a box full of old letters that revealed that the Parker family had some serious skeletons in the closet -- skeletons that were about to come back to life.

Upon finding a genealogical link between the Parkers and the Meadows and Fry families, who had left behind a legacy of dark reputation and ill will in the small, rural Pennsylvania village where they lived, Ryan becomes obsessed with finding out what it was his ancestors were actually guilty of. And his obsession leads him to become ensnared in events that, though they happened in the 19th century, are far from over, and in the end may reawaken evil that was thought to be dead and buried for over a century. 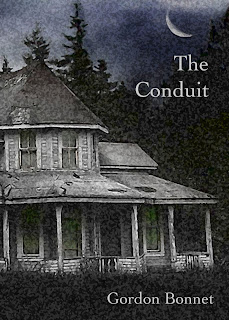 The Conduit has gotten five-star reviews at Amazon and Barnes&Noble, from which it is available as an e-book.

In the following passage, Ryan has become frightened of his own obsession with the cigar box full of letters, and has decided to burn them.

It was after five by the time he arrived home. Diane’s shift at the hospital was over at 4:30 but she often had paperwork to catch up on, and sometimes didn’t make it home until 5:30 or 6. Ryan felt desperate to have the letters destroyed by the time she returned. The thought of her walking in and catching him in the act seemed somehow dreadful, for no reason he could really put his finger on. He wanted it to be a fait accompli by the time she arrived, something he could tell her about but that she couldn’t affect, whatever she thought about his actions.

He walked into the living room, dropped his thermos and papers on the couch, and went over to the wood stove. There was adequate firewood but little in the way of kindling, so he went down to the study and grabbed some old newspapers from his desk to use in getting the blaze going.

Ryan knelt in front of the wood stove, and began to arrange split logs carefully across the bottom. He stuffed newspaper and some bits of bark and other debris from under the wood cradle underneath. He reached for the matches, and found that his hands were shaking so badly that he broke the tip from the first match before it would light. The second one lit easily, and he touched it to the newspaper, and within seconds the whole crumpled mass was ablaze.

The big logs were slower to catch, but he fed the fire with bits and slivers of wood until the larger ones were flaming. Then, with a grim expression, he turned to the coffee table, and retrieved the box of letters.

He opened it, half expecting to see the blood-red lettering from his dream the previous night, but there was nothing but the faded ink that he’d seen the first time he’d opened the box. He picked up the first letter, and slipped it into the fire. It blackened and curled up almost immediately, leaving nothing behind but twisted sheets of ash.

He added the second, and then the third. The temptation to stop and read them was powerful, but he resisted, and continued to add them one at a time, staring the whole time into the devouring flames.

He was nearly done when the door opened. He jumped, and half turned, and Diane was walking in the front door, carrying her satchel and looking tired.

She walked over to where he was kneeling, gave him a quick kiss, and said, “Hi, sweetie. How was work?”

Ryan looked down at the remaining letters – there couldn’t have been more than five of them – and said, “Um, fine. How was your day?”

Diane kicked off her shoes. “Fine. But long. Have you started dinner? I’m famished.”

“No,” Ryan said. “I was just finishing… this, and then I was going to start.”

“I’ll get it started,” she said, disappearing into the kitchen. “I think we can just throw some pork chops on the broiler, and we’ve got salad left over from yesterday. Is that okay with you?”

“Yeah. Fine,” Ryan said, toward the open kitchen door. Then he turned back toward the fire, and one by one fed the last few letters into the flames. Then he tossed the box onto the burning logs, and closed the door to the wood stove.

Thank god, he thought. I did it. Thank god. I don’t know if my mom was right about all this, but it certainly feels like a relief that they’re gone.


Ryan and Diane lingered over a glass of wine at the end of dinner. Ryan felt the tension draining from him, and realized that his muscles had been tight the entire day. He looked into the amber depths of his wine glass, and smiled a little.

“You look like a cat that ate three or four canaries,” Diane said, smiling.

Ryan grinned in response. “Not really,” he said. “I just am happy to have a chance to relax. With you. I had a bad dream last night, and it kind of shook me up. Colored my whole day.”

“Want to tell me about it?” Diane said.

“Honestly, not really,” he replied. “Or not right now. Now I’m just happy not to be thinking about it. I’ll tell you another time.”

She tipped her glass back and forth, watching how the light caught the surface of the wine. “What possessed you to burn all that stuff this afternoon?”

“When I came in. You had that box of papers, and were putting them into the wood stove.”

He didn’t respond at first. “Well,” he finally said, “I told my mom I would. She seemed to feel pretty strongly about it.”

“Why would your mom care about a bunch of old bills and credit card statements?”

Ryan felt a cold tremor in the base of his stomach. “What?” he said, his voice high and strained.

“How did your mom even know about that box of old Visa statements and bills, and why would she tell you to burn them?” Diane was looking at him narrowly, questioningly.

“I…” he began. “It wasn’t…” And he was getting up, pushing the chair back, its legs squeaking against the tile floor, and he was half running back into the living room. And there, on the coffee table, was the cigar box, the woman in the Spanish headdress still leering up at him seductively, the box still showing a dark crack where the lid didn’t quite seat properly.
Posted by Gordon Bonnet at 5:53 AM