Do you like murder mysteries... with a twist?  My latest novel, Poison the Well, is about a rather unusual private detective agency.  Who is on the case?  There's the brisk, efficient Bethany Hale -- who has precognitive, but often highly symbolic, dreams.  There's the stammering, shy telekinetic, Jeff Kolnikoff.  There's Troy Seligman, who would really rather just be home with his family than solving crimes, but is blessed (or cursed) with an ability to perform astral projection.  There's the odd, reclusive Callista Lee, whose skills as a telepath are off the charts.  Then there's the latest hire -- handsome, swaggering Seth Augustine, who is a brilliant psychometer, but would just as soon use his unusual talent to find a beautiful woman to spend the night with.  And this mismatched band is led by the elegant, enigmatic, silver-haired Mr. Parsifal Snowe, who somehow gets them all to work like a well-oiled machine.

And this time, they'd better.  Because they're working on a new case... trying to find the murderer of a man whose champagne was poisoned at a wedding reception.  The problem is... he has no identification, and everyone at the wedding claims that they have no idea who he was.  Someone obviously did... and that someone had a motive for murder.

Want to try to figure it out before the members of Snowe Agency do?  Then get ready to solve the mystery of the poisoned wedding guest.  Poison the Well will be available on Wednesday, May 16, at Amazon (Kindle) and Barnes & Noble (Nook). 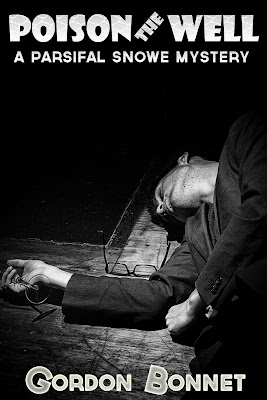 Posted by Gordon Bonnet at 4:47 AM