It's not often that I pick up a book that is (1) highly recommended, and (2) by a Nobel Prize-winning author, and honestly dislike it.  Unfortunately, that was my reaction to Kenzaburo Oe's Death by Water. 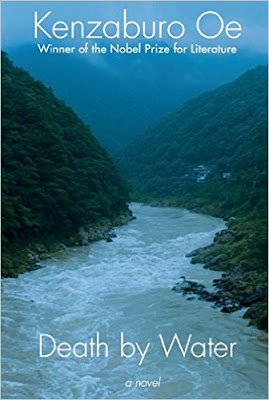 The premise sounded intriguing; aging writer Kogito Choko has the intent to write a book telling the story of his father's death by drowning following a failed plot on the life of the Emperor of Japan, but by the terms of his mother's will has to wait ten years after her death to have access to the red leather trunk that contains his father's correspondence.  He becomes involved with a theater company that is devoted to producing Choko's works, and the "drowning novel" is anticipated with excitement as the crowning achievement of the writer's career.

The excitement, however, fizzles out when the trunk doesn't contain much of interest, and the novel flounders as well -- devolving into page after page of conversation about theater and philosophy and the arts, with very little else happening.  The overall feel is that you are in a café overhearing a couple of full-of-themselves literary types discussing details of their studies, for hours on end.

Troubling, too, is the main character, who comes across as a narcissistic and coddled old man, overprotected by his sister Asa (who is one of the most interesting characters in the book), disliked even by his own mother.  When his wife becomes dreadfully ill, he barely gives her a second thought, passing off her care to his sister and daughter, and only goes to visit her once or twice during her convalescence.  His treatment of his disabled son is reprehensible, a theme in the story that is never explained and never resolved.  It may be that such a character plays better to a Japanese audience -- I could well be impressing my Western standards of behavior onto another culture -- but to me, it was seriously off-putting.

I'm not a reader who demands action and plenty of it; Umberto Eco's Foucault's Pendulum is my all-time favorite book, after all.  But Oe's determination to tell, not show, just wore me down.  If you can stick it out, the last two chapters are wonderful, and cut loose from the rest of the book would have made an excellent long short story or short novella.  But the lengthy slog you have to commit yourself to in order to get there is, in my opinion, hardly worth the effort.
Posted by Gordon Bonnet at 2:00 PM