I want you for a moment to look at what you're reading with different eyes.

Imagine that this text was in a language you do not speak.  You do not know what language it is encoding, nor even which direction the text is to be read -- left to right, or right to left.  And not only do you not know what the words mean, you don't know the sounds that correspond to each letter.  In fact, you don't even know if the letters do correspond to single sounds; in some languages, symbols correspond to syllables, or even entire words.

You are starting, therefore, from nothing.  All you have in front of you is a long string of geometric shapes.

Your task: translate it.

If you are sitting there thinking, "How on earth would anyone even approach this hopeless problem?", then you need to read Margalit Fox's outstanding book The Riddle of the Labyrinth. 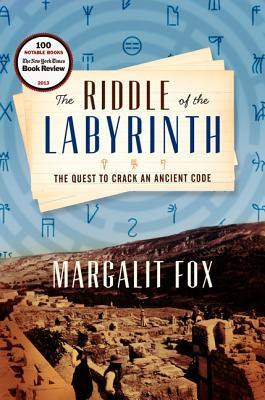 The book tells the fascinating story of three intrepid individuals who set out to confront the herculean task of decoding a completely unknown language with an unknown script -- the Linear B writing of Crete.  It was known from a set of clay tablets recovered in the 1890s from Knossos, and had resisted all attempts to interpret it.  Some people thought (with little evidence) that it was Etruscan; others that it was some Celtic or Balkan language, or a derivative of Phoenician; some said it was an archaic form of Greek.  None of these hypotheses had much going for them, although there were linguists, archaeologists, and historians who espoused one or the other vehemently regardless, generating endless arguments in which all sides had no real claim of support.

The tale starts with Arthur Evans, the eccentric British archaeologist who recovered the tablets from Crete and brought them back to England.  He was possessive of his finds, and reluctant to let linguists study them or make copies of the text; partly because he wished to decode them himself (although he lacked the skill to do so), and partly from sheer pig-headedness.  But the other two players in the game, the sensitive,  high-strung British linguist Michael Ventris, and (most importantly) the brilliant and driven American linguist Alice Kober, eventually persuaded Evans to allow them to study the text.

And, beyond all imagination, they eventually succeeded in decoding it.

The Riddle of the Labyrinth is a fascinating story, the tale of three very different personalities by whose efforts we now can read a script that no one had read for three thousand years.  Fox's narrative is engaging, and she presents us with a lucid explanation both of the scope of the problem and how Kober and Ventris approached and finally cracked it.  This book is a must-read for anyone with an interest in languages, ancient history, or contemporary biography.
Posted by Gordon Bonnet at 6:13 AM

Email ThisBlogThis!Share to TwitterShare to FacebookShare to Pinterest
Labels: books, Linear B, Margalit Fox, non-fiction, The Riddle of the Labyrinth