Are you brave enough to enter the Sephirot?

And if you do, will you ever find your way out again?

Duncan Kyle is an ordinary twenty-something whose simple life of sports, job, and girlfriend comes to a crashing halt late one night when he falls through the floor of his apartment.

He finds himself in Malkuth, a desolate, desiccated world where the only living beings are a sardonic Sphinx and her invisible caretakers, who in this frigid place are drawn to anything warm. He is told by the Sphinx that he will have to make his way through ten worlds before he can return to life as he knows it--the ten emanations of the Sephirot. 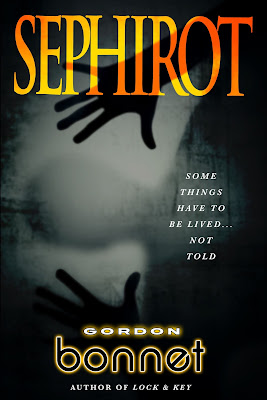 On his journey, Duncan encounters a wild huntress torn between making love to him or killing him; an elderly woman who tries to convince him that he has been ill and dreamed the whole thing; a scarlet-robed judge who sentences him to be whipped and executed for performing evil magic; a kind potter and his daughter who take him in and heal his injuries; and a timid, soft-spoken Methodist minister who helps him survive in a place where all hell breaks loose--literally--once the sun goes down. In every world he visits, though, one thing stays the same. Duncan has to rely on his wits alone to stay alive and find his way to the next portal, and he has to summon the strength of will to keep going--because if he falls for the snare each world represents, he'll never find his way home.

Available at Barnes & Noble, Amazon, and fine bookstores near you!
Posted by Gordon Bonnet at 3:14 AM