Every once in a while I'll stumble across a book that sticks with me long after I've turned the last page.  What usually does it for me is some combination of haunting imagery, brilliant use of language, and a plot with a deep and intricate subtext.

Some rare books have all three.

Such a book is Sacred Alarm Clock by John Biggs.  A post-apocalyptic novel with a lot to say about life in the United States right now, the story follows the interwoven lives of Wylie Chatto, a mentally-challenged Apache teenager who gets messages from Geronimo and knows things are going awry when he smells rosemary; Mona and Chris, a pair of lovers trying to find their way through the ravaged countryside of what is left of Oklahoma without getting killed; and Karma and Joseph, high school teenagers who are suddenly facing a life where to survive means avoiding crazed people and packs of wild dogs. 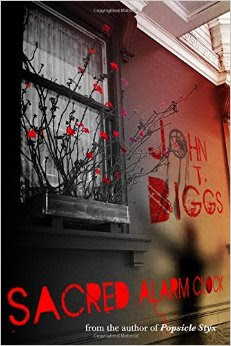 Set in an indeterminate near-present, Sacred Alarm Clock is the story of how one push -- in this case, a plague called the New Flu that causes paranoia, religious mania, and eventual death -- can cause the whole house of cards we call "civilization" to collapse.  And when the power goes out and the plumbing stops working and the gasoline runs out and the governments fall, the survivors are at the mercy of each other.  The result is atrocity and violence -- and, sometimes, acts of tremendous selflessness and compassion.

Biggs's book is simultaneously terrifying and uplifting.  It follows in the tradition of Lord of the Flies and The Stand in holding up a mirror to our primal selves.  He draws the bleak landscape of a post-United States North America in vivid and memorable terms, and brings you on a journey that you won't forget for a long, long time.
Posted by Gordon Bonnet at 5:04 AM