What would you do if a single unexpected event completely knocked the pegs out from under your universe?

That unsettling question is at the heart of Haruki Murakami's novel Colorless Tsukuru Tazaki.  The main character tells us about this pivotal moment in his life -- when he was banished from his group of friends, without explanation and without possibility of recourse, and told never to contact any of them again. 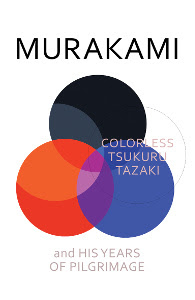 The loss of his connection to the four people who were his entire world plunges Tsukuru into a near-suicidal fugue state for months.  He would have killed himself, he tells us, if it had been easy and painless; as if a mere nod of acquiescence could erase him completely, not only from the world but from everyone's memories.  He had noticed prior to his expulsion that his name was the only one of the five that didn't have a color word in it -- in fact, his friends went by the nicknames Aka (red), Ao (blue), Kuro (black), and Shiro (white) -- but now he has truly become colorless, a ghost only barely participating in his own world.

It is only years later that a new friend and potential lover, Sara, is strong enough to push Tsukuru to open up these wounds from his past.  She persuades him to go back and find the four friends who so mysteriously betrayed him, and ask them why they did it.  To give any more details would spoil the unfolding of this story, so I'll simply ask you to do yourself a favor and read it.

Colorless Tsukuru Tazaki is a beautiful portrayal of friendship, memory, betrayal, redemption, and the hard choices a moral person sometimes has to make.  It is unusual amongst Murakami's work in not having the surreal aspects that most of them weave in; but far from weakening it, this makes it perhaps Murakami's most human novel.  The characters tell a story that is by turns funny and tragic, simple and hauntingly complex, and you'll be thinking about what it all means long after you turn the last page.
Posted by Gordon Bonnet at 5:54 AM