While wearing my other hat -- "skeptic/critical thinking activist" -- I have frequently railed against the the people who, through ignorance or a political agenda, have publicly campaigned against doing anything about anthropogenic climate change.  Some of these folks are true deniers, claiming that the phenomenon itself doesn't exist, despite copious evidence to the contrary and the consensus of nearly 100% of the world's climatologists.

I.e., the people who actually know what they're talking about.

I have made the statement more than once that these are people who, by and large, have never bothered to read a single scholarly paper about climate science.  Some of them, such as James "Senator Snowball" Inhofe, probably wouldn't understand it if they did.  But last week I finished a book that is accessible to everyone, with or without a scientific background.  And not only is it informative and well-written (if scary in its implications), it is a gripping tale of the people who have worked tirelessly to find the truth about what runs the Earth's climate.

Thin Ice, by Mark Bowen, primarily focuses on the research of glaciologists and husband-and-wife team Lonnie and Ellen Thompson.  They have made a career of climbing the world's highest mountains, always at great risk to themselves, to obtain ice cores from glaciers.  These ice cores are like tree rings -- stratified layers that preserve a record of the Earth's climate, some so well preserved that they can be read back tens of thousands of years.

And it's pressing that Thompson and his colleagues do this research, and do it quickly -- because the world's glaciers are fast disappearing. 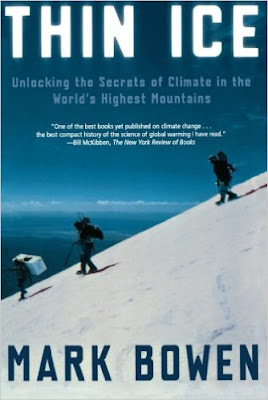 Each chapter deals with a different expedition Thompson has led -- to Tibet, to Peru, to Antarctica, to Tanzania.  In each place the team faces different struggles and risks, dragging hundreds of pounds of ice coring equipment (not to mention their own food and supplies) up terrain more rugged than most of us will face in a lifetime.  Temperatures plunge below zero Fahrenheit; winds clock fifty miles per hour or more, dropping wind chills into the realm of frostbite-within-seconds.  Success is far from guaranteed, both from natural problems (bad weather, equipment malfunction) but from purely human snafus -- such as the endless bureaucracy from the Chinese government the team had to endure to get permission to climb in Tibet.

But the results of their research are unequivocal; the temperature climb we've seen in the past fifty years is unprecedented in the last hundred thousand.  Thompson and other climatologists have known this for decades.  The runaway burning of fossil fuels has driven an alteration in the world's climate that might be the fastest shift the Earth has ever seen.  And all that comes with it -- sea level rise, extinctions, changing rainfall patterns, and tropical diseases steadily edging their way northward.

Bowen's book is the gripping story of men and women who have risked their lives to find out the truth about the world's climate, and our effect on it.  Not only does it paint a picture of a very real human drama, it highlights information we all should be informed about.  So for anyone who doubts the impact of fossil fuel burning on the weather, you don't have to slog through a scholarly paper in a scientific journal.

All you have to do is read Thin Ice.  Then come back and tell me if you're still unconvinced.
Posted by Gordon Bonnet at 3:12 AM