There's a logical fallacy that I call "weasel words."  It's not a fallacy, technically; more a way of insulating yourself from being called out as wrong.  All you have to do is use words like "arguably," and no one can claim you've made an error.  "Kim Kardashian is arguably the sexiest woman in the world."

What?  I said you could argue the point.  Don't yell at me.

That, in a nutshell, is the problem with Stacy Schiff's book Cleopatra.

I've had a fascination with Egyptian history since my teenage years, so I thought Cleopatra would be a gimme.  Add to that the fact that it's a Pulitzer Prize winner and a New York Times Book Section Book of the Year, and I thought I was going to have trouble putting it down.  Egypt + sexy femme fatale + intrigue with the Roman Empire = unbeatable, right? 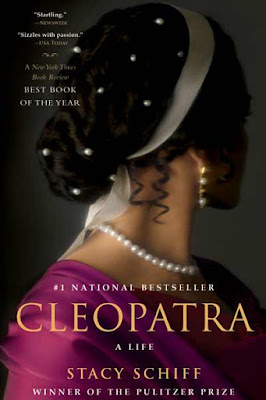 Unfortunately, Schiff has to admit up front, over and over again, that the actual documents that mention Cleopatra are pretty thin.  Then what she does is takes that skimpy textual background and spins it into 400 pages by making stuff up, and starting every other sentence with "It could be that..." or "Presumably..." or "Whether or not..." or "We can guess that..."  or "Perhaps..." or "Maybe..." or her favorite, "It can only be imagined that..."


In the first place we have Caesar's resounding silence.  We leave all kinds of things out of our memoirs and Caesar (and his ghostwriter) omitted a great many, not least of all his personality.  Caesar wrote of himself with a stern, clinical detachment and in the third person; his style is so limpid and dispassionate as to appear incontestably true.  Which it may well be...  Similarly, one of the few places Cleopatra fails to make a dramatic entrance is in Caesar's Civil War, where her charms are supplanted by the seasonal winds.

Only a page later, we're told:


The queen of Egypt had every political reason to impress and please [Caesar]; personal rapport aside, there would have been a heady admixture of pride, relief, and gratitude.  And she had the resources to impress... Whether or not Caesar had considered annexing Egypt he had clearly discovered that Cleopatra was in many respects similar to her country: a shame to lose, a risk to conquer, a headache to govern.  Some courtiers had remained faithful; among Cleopatra's entourage figured several of her father's advisers.  Those who had not did their best quickly to reassess their conduct.  So presumably did the Greek aristocracy, which had presented Cleopatra with her strongest opposition...

When spring rolled around and the sea reopened, Cleopatra may have sailed home, to return to Rome later in the year.  Two consecutive visits seem more likely than a single extended one; she could hardly have justified an eighteen-month absence, no matter how confident she felt of her authority in Egypt.  That would have entailed a grueling amount of travel, though the southbound trip was a less taxing one.  Assuming she returned to Alexandria in 45, she set out in late March or early April, by which time the northeasterly squalls had abated... If Cleopatra indeed sailed home early in 45, she was again in Rome by the fall.

... well, boring.  How many times can we be told about how vibrant and cosmopolitan Alexandria was, how bluff and hale-fellow-well-met Mark Antony was, how alluring Cleopatra was, without saying "Okay, we get it, thanks?"  Had Schiff jumped into historical fiction with both feet, and had dialogue, action, and rich characterization, it could have been brilliant.  As it was, it felt as if she wanted to create a sense of the mesmerizing character of Cleopatra (and her paramours, Julius Caesar and Mark Antony) without having to embrace the fact that she was writing a fictionalized account based on what slim primary documents exist.

Myself, I'll take honest-to-goodness historical fiction instead -- Robert Graves's I, Claudius and Claudius the God, Umberto Eco's The Name of the Rose, Sigrid Undset's Kristen Lavransdatter and The Master of Hestviken, Philippa Gregory's The Taming of the Queen.  You'll learn more history from those, and at the same time be far more entertained.

Arguably, I mean.  It's entirely possible that I'm wrong.  We could discuss it.
Posted by Gordon Bonnet at 4:06 PM