I used to love to run.  It was one of my best stress relievers, cleared my head when I was feeling frustrated or overwhelmed, and kept me reasonably fit.  Then about ten years ago, I started getting serious joint pain.  I was getting "hotspots" -- redness and inflammation in particular joints that would last for a few weeks and then vanish, only to reappear elsewhere.  I was certain I was developing rheumatoid arthritis, a devastating disease that both my mother and my Great-Aunt Marie suffered from.  And for someone who was not only a runner, but a writer and a musician, looking at something that would eventually claim my mobility was downright scary.

So I went to the doctor.  I tested negative for the rheumatoid antibody.  But the literature suggested that in the first couple of years, a significant percentage of sufferers don't have appreciable levels of the antibody.  The pain continued, often causing me to walk unevenly, slowing me to a limp some days.

And (I thought) permanently ending my running career.

Fast forward to last year.  Last summer, it suddenly struck me that I hadn't had a flare-up in a while.  I started paying attention, and went through the fall and winter -- nada.  My knees, which used to ache just from too much walking, were feeling...

... fine.  Like, better than they had in years.  So this February, I started running again, tentatively at first, wondering if it was going to precipitate an attack.

Now, I'm no doctor, but one thing I know is that RA does not get better.  It can ease for a while, but never goes away completely.  So apparently, the antibody test was correct -- I don't have RA.  We still don't know what was causing the inflammation and pain, but whatever it was seems to be gone.

It's a mystery.  But for once, one with a happy ending.

The upshot of it all is that yesterday I ran my first semi-serious race in perhaps 35 years, the May Day 5&5.  I had three goals: (1) finish the course; (2) run the whole thing instead of taking walking breaks; and (3) don't come in last.  I'm happy to report that I met all three goals, with a 5K time of 34:25, and finished right in the middle of the pack.

The reason that all this comes up is that to celebrate my resumption of running, my friend and writing buddy Cly Boehs of the wonderful blog Mind at Play (which you should all check out) last week gave me a copy of Haruki Murakami's What I Talk About When I Talk About Running.  This short (180-page) and delightful little memoir is a must-read for anyone interested in the writing process, or even mildly inclined to run.  Murakami himself is a marathoner, running one marathon and one triathlon every year (a level of the sport I have no particular inclination to undertake), and what he looks at is how a dedication to the discipline of training for a sport is like what it takes to be a writer -- or, honestly, what it takes to accomplish damn near anything. 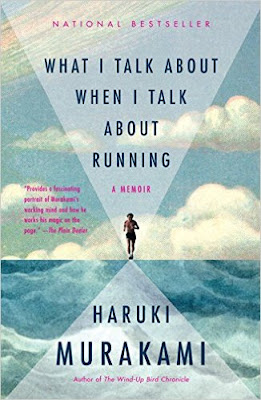 The whole thing is written in his signature whimsical, self-effacing style, often poignant, sometimes laugh-out-loud funny.  It's not only a nice window into the life of one of my favorite authors (and someone whose style inspires my own approach to writing fiction); it's a look at how dogged persistence and a refusal to accept the answer of "no" from your body can propel you to reaching your goals.  It's also a gentle and wry look at how our bodies change as we age.  At 67, Murakami is twelve years older than I am, and has had to adjust what he does -- but, hearteningly, not give it up.

And above all, it's simply a fun read.  Murakami has always impressed me at his ability to express mind-bending concepts using simple language, and here he has turned his attention to the philosophy behind a sport I thought I would never participate in again.  So reading his book was doubly poignant for me.

And now, I'm off to go running.  Maybe do some writing afterwards.  The two, really, aren't that different after all.
Posted by Gordon Bonnet at 4:51 AM

Email ThisBlogThis!Share to TwitterShare to FacebookShare to Pinterest
Labels: book review, Haruki Murakami, marathons, non-fiction, running, sports, What I Talk About When I Talk About Running, writing