I was a little dubious while reading the first few pages of E. L. Doctorow's famous book Ragtime.  First, a good chunk of the characters are never mentioned by name -- there's Mother, Father, Grandfather, Mother's Younger Brother, and The Little Boy.  Second, the prose is choppy, made up of clipped, short sentences -- read aloud, it would sound like the reader was really irritated at whoever was listening. 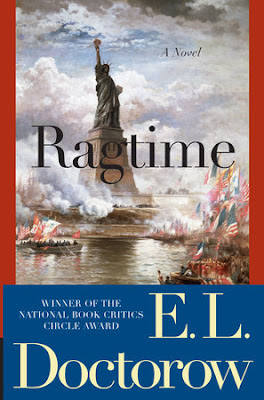 But it grew on me.  The story is a twisty maze of characters, including some fictional ones (the above-mentioned, as well as a poor Jewish family, the young African American girl Sarah, and her lover, Coalhouse Walker, Jr.), along with some actual historical figures (the pinup girl Evelyn Nesbit, the multi-millionaire J. Pierpont Morgan, murderer Harry Kendall Thaw, and Harry Houdini, to name four).  At first the chapters seem disjointed from the overall narrative, giving you information about people whose relevance to the overall story is impossible to determine; but as the tale progresses, all of these unlikely characters, from different strata of society, are woven together into a seamless pattern.

Still, I'm not sure I actually liked Ragtime.  Doctorow does a superior job of creating a narrative around the odd links between people from different walks of life -- but he doesn't do a very good job of making us like any of them.  Father is a self-centered narcissist, taking off to go on crazy adventures to get away from his family and responsibilities; Mother repressed, unhappy, and resigned to her life in a pitiful sort of way; Mother's Younger Brother a pre-World-War-I Rebel Without A Cause.  Coalhouse Walker, who (I think) we're supposed to sympathize with, is never developed enough that I particularly cared what happened to him.  All of the other characters are mere names.

The story was interesting enough to keep me reading, and the narrative had enough action in the last hundred pages to push the plot forward.  But the flat characterization and Doctorow's affected, self-conscious writing style detracted enough that I was left at the end feeling kind of cheated.  I don't think it would have taken much to flesh out the characters enough to draw the reader in; as it is, it felt very much like watching one of the stilted, black-and-white silent films from the very era Doctorow was writing about.
Posted by Gordon Bonnet at 3:40 PM No comments:

Two years ago, our high school librarian issued a challenge to students and staff; to read a hundred books in four years.  Anyone who succeeds gets their name painted on the library wall under the heading Centum Libri (100 books).

I love to read, so the challenge appealed to me.  The problem was, twenty of the books have to be classics.  My background in classics is sorely deficient, mostly due to a habit of avoidance when I was in high school and college, and I'd developed an attitude in line with Mark Twain's quip -- "Classics are books everyone wants to have read, and no one wants to read."

Still, a challenge is a challenge, so I have dutifully sought out classics to read.  And this week, I finished Willa Cather's Death Comes for the Archbishop. 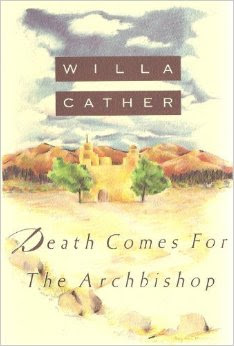 This book isn't the sort of thing I typically read; a quiet, understated period piece, in which there is little action and much of the plot motion is internal to the main character's head.  The story revolves around Father Jean Latour, a French priest sent to be the first bishop of the Catholic Diocese of Santa Fe in the mid-1800s.  Latour is not your stereotypical missionary; he is soft-spoken, gentle, and kind, and most strikingly, understanding and respectful of the customs of the people whose spiritual life he is entrusted with.  His vicar, Father Joseph Vaillant, travels with him into what was then a harsh and dangerous wilderness -- a rocky desert filled whose inhabitants (Spanish, Mexican, Native, and Anglo) were frequently at each other's throats, where there was no law to speak of anywhere outside of the widely-separated towns, where a misstep on a trail could lead to your becoming inextricably lost and probably dying of thirst and exposure.  Father Latour makes his way through this unforgiving landscape, earning the love of the people he leads, and eventually becoming the first Archbishop of Santa Fe shortly before his death.

The book is a remarkable portrait of the 19th century West.  Its sweeping imagery will transport you to another time and place, in a world where a trip from Tucson to Santa Fe was lengthier and more fraught with danger than traveling halfway around the globe is now.  It's not an exciting book, by the standards of the contemporary novel, but rather a rich tapestry which will stay vivid in your memory a long time after you turn the last page.
Posted by Gordon Bonnet at 6:21 AM No comments: