Everyone handles loss and grief differently.  Some turn inward; some weep; some become angry.  When Helen Macdonald's beloved father died, suddenly and unexpectedly, her world seemed to crumble around her.  She'd lost her touchstone, one of the small number of people in her life that anchored it, made it make sense.

She tumbled headlong into a depression that severed her from contact with friends and the rest of her family.  There was only one thing in her life that still felt real to her.

Helen was a falconer.  It'd been her driving passion since childhood, since discovering T. H. White's book The Goshawk and realizing, "I want to do this."

She tells the story of her ride upwards out of her grief and despondency on the tail of a goshawk named Mabel in her book H is for Hawk.  It is a brilliant, occasionally funny, deeply moving tale of how one woman dealt with the horrible ache of losing someone dear -- and is a gripping, thought-provoking read. 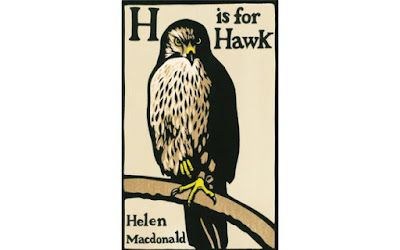 Goshawks are notoriously difficult to train.  They are nervous, stubborn, aggressive, and aloof.  Her choice of this species was deliberate -- she needed something to sink herself into, to distract her from her despair.  Along the way, she parallels her story with the one White told about his own similar experience in his book The Goshawk.  White (the author of The Once and Future King) was a deeply unhappy man, who never recovered from abuse he received as a child at the hands of his insane father and various sadistic schoolmasters.  He, too, was dealing with despair, albeit of a different sort, and looked to the wildness and freedom of a hawk to teach him how to live.

Macdonald's path was not an easy one, but what she learns along the way was worth the pain, and what she learned had to come from experience.  On the other hand, White in the end lost focus, and also lost his hawk, Gos; afterwards he compares Gos with symbols of violence, with bloodthirsty men from the pages of human history, and his own failed attempts to train him as a war.  Macdonald writes:


I swear to myself, standing there with [White's] book open in my hand, that I will not ever reduce my hawk to a hieroglyph, an historical figure or a misremembered villain.  Of course I won't.  I can't.  Because she is not human.  Of all the lessons I've learned in my months with Mabel this is the greatest of all: that there is a world of things out there -- rocks and trees and stones and grass and all the things that crawl and run and fly.  They are all things in themselves, but we make them sensible to us by giving them meanings that shore up our own views of the world.  In my time with Mabel I've learned how you feel more human once you have known, even in your imagination, what it is like to be not.  And I have learned, too, the danger that comes in mistaking the wildness we give a thing for the wildness that animates it.  Goshawks are things of death and blood and gore, but they are not excuses for atrocities.  Their inhumanity is to be treasured because what they do has nothing to do with us at all.

H is for Hawk is a fantastic book, one that you will remember for a long time after you turn the last page.  Macdonald's trek through the valley of the shadow of death is one we all take, for all of us lose people dear to us, all of us have to come to terms with that most difficult part of what it means to be human.  In her book, we learn along with her that such grief can be endured, and the lessons it has to teach are truly worth learning, however much they cost us in pain and anguish.
Posted by Gordon Bonnet at 7:33 AM No comments:

I am fascinated by how the universe works.  It's what got me into science; I felt driven to understand not just the surface, the descriptive stuff, but why things operate as they do.  Of course, when you start pursuing the whys in science, you get yourself in deep water fast -- and, according to a physics professor friend of mine, you will inevitably at some point come up against the brick wall of "we don't know why this is the way things are; they just are this way."

But it's this drive to comprehend the inner workings that spurred me to read Sean Carroll's amazing book The Particle at the End of the Universe -- the story of how the Higgs boson was discovered, and what it implies about the deep structure of the cosmos.  Carroll's book is at once personal and technical; any huge endeavor such as the search for the Higgs inevitably involves a kaleidoscope of different personalities, each with their own specialties and quirks.  Carroll does a wonderful job of showing us not only the science behind the Higgs, but the fascinating interplay of scientists and technicians that made its discovery possible. 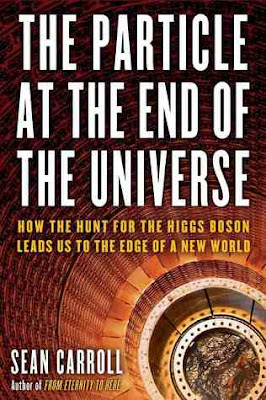 It's also inevitable, however, that the book involves some venturing into the deeper waters I alluded to earlier.  I found parts of it a challenging read, despite my bachelor's degree in physics (although I must, in the interest of honesty, mention that my performance as a physics student was lackluster at best).  But even the parts that were difficult were worth muddling through.  He's a wonderfully lucid writer, and the glimpses you get of the inner workings of particle physics are as grand as they are mind-bending.

And he's up front, too, about the fact that there are still huge gaps in our understanding.  Even what we do know has a mystifying quality to it, when you take it to the level of subatomic physics.  Take the following passage from Carroll's book, about something that we experience every day -- light:


It's only because the data force us into corners that we are inspired to create the highly counterintuitive structures that form the basis for modern physics...  Imagine that a person in the ancient world was wondering what made the sun shine.  It's not really credible to imagine that they would think about it for a while and decide, "I bet most of the sun is made up of particles that can bump into one another and stick together, with one of them converting into a different kind of particle by emitting yet a third particle, which would be massless if it wasn't for the existence of a field that fill space and breaks the symmetry that is responsible for the associated force, and that fusion of the original two particles releases energy, which we ultimately see as sunlight."  But that's exactly what happens.  It took many decades to put this story together, and it never would have happened if our hands weren't forced by the demands of observation and experiment at every step.

So along with Stephen Hawking's A Brief History of Time and Brian Greene's The Fabric of the Cosmos, The Particle at the End of the Universe is another book to add to your list of fantastic non-fiction reads.  I won't promise that it'll be an easy summer read -- but you will come away with your mind significantly expanded.  And as Ralph Waldo Emerson said, "The mind, once stretched by a new idea, never returns to its original dimensions."
Posted by Gordon Bonnet at 4:06 PM 1 comment:

Email ThisBlogThis!Share to TwitterShare to FacebookShare to Pinterest
Labels: non-fiction, physics, Sean Carroll, The Particle at the End of the Universe

The first chapter of Poison the Well -- the first of the Parsifal Snowe mysteries, about a psychic detective agency.  Coming out in print from Oghma Creative Media in Summer of 2017!

Posted by Gordon Bonnet at 8:12 AM No comments: