I haven't posted in a while for a couple of reasons -- the start of school has been the usual whirlwind of lesson prep, evening open house, meetings, and exhaustion, and also because I've spent the last three weeks making my way through the 560+ pages of Guy Gavriel Kay's Under Heaven.

I honestly didn't expect to like Under Heaven much.  On the recommendation of a friend, I'd gotten it and another of Kay's books, Tigana, a few months ago.  I started with Tigana and got about a third of the way in before I gave up -- I found it dense, complicated, and filled with way too many underdeveloped and unrelatable characters to keep my attention.  (To be fair, though, I felt the same way about Gabriel García Márquez's One Hundred Years of Solitude, widely regarded as a masterpiece.  So it may well be me.)

In any case, Under Heaven sat there unread until three weeks ago, when I figured I ought to tackle it.

I was absolutely transfixed, pretty much from the first page.

The story is a fictionalized account (actually fictionalized enough that it could be classified as "alternate history") of the Tang Dynasty of China at the time of the An Lushan Rebellion (mid 8th century C. E.).  The main character, Shen Tai, second son of the late General Shen Gao, has gone to a battle site called Kuala Nor and is determined to bury the skeletons of the dead to put the ghosts of the battle to rest.  He is a quiet, thoughtful man, ill-suited to the castle intrigue of the capital Xinan, and his mission to live a solitary life laying to rest the spirits of slain warriors seems to suit him well. 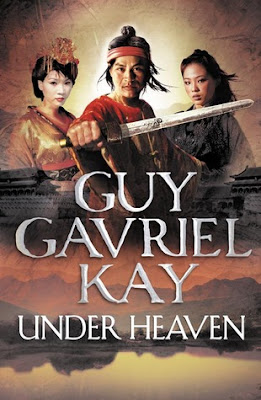 But as in real life, things seldom go as planned.  His selfless devotion to giving proper burial to the victims of the battle has come to the attention of more than one highly placed person.  One is the King of Tagur, who is married to the sister of the Tang Emperor Taizu.  The other is the Emperor himself.  And the attention he's getting from these two august personages brings the enmity of a third person -- the scheming, cruel First Minister, Wen Zhou.

So Shen Tai ends up caught in the very web he'd tried to escape -- having to navigate his way through the plots, rumors, and complex rivalries of the royal family, accompanied only by his bodyguard, the Kanlin warrior Wei Song, and his friend the poet Sima Zian.  And when his position is made even more precarious by an unimaginably rich gift from the King of Tagur -- 250 priceless Sardian horses -- Shen Tai has to figure out how to stay one step ahead of the conspiracies that are determined to end his, and his friends', lives.

Under Heaven is a phenomenal book -- intricate, complex, brilliantly written.  The characters are so well drawn that they virtually leap off the page.  It's not fast-moving or action-packed -- the story is as the times were, full of intrigue and backstabbing and gossip.  But it is a beautiful, haunting tale of one man trying to survive what the Chinese adage calls "interesting times."  I can't recommend it highly enough.
Posted by Gordon Bonnet at 6:07 AM No comments: