I have always had, for some reason, a particular fondness for non-fiction books about natural disasters.  Earthquakes, hurricanes, volcanic eruptions -- the sheer power of what the world can do is both frightening and compelling.  It also explains why if I hadn't become a high school biology teacher, my second choice would have been "tornado chaser."

So it's unsurprising that I picked up a copy of Simon Winchester's A Crack in the Edge of the World a few weeks ago.  It's a mesmerizing account of the 1906 San Francisco earthquake, one of the largest quakes ever to hit North America (intensity is an estimate, given the primitive technology of the time, but it's thought to have been beaten by only one earthquake in modern times -- the mind-bogglingly huge Anchorage, Alaska earthquake of 1964, which registered 9.2 on the Richter scale and lifted some parts of the coastline by twenty feet). 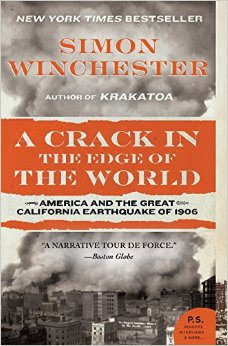 Winchester's book isn't just about the event itself.  It goes into the geology of the San Andreas Fault, how it is related to the movement of tectonic plates, and how we know what we know about seismic activity.  It also delves into the history of California, giving us a vivid picture of what it was like to live in those times, and includes eyewitness accounts of people who lived through the quake itself (one of them was famous opera singer Enrico Caruso, who seemed to consider the whole thing somewhere between an inconvenience and a personal slight).

He takes us from the years before the quake, showing how San Francisco grew from a small agricultural settlement into a thriving city, and how the landscape changed on the day of the event (both literally and figuratively).  In some ways, San Francisco never completely recovered, and the hub of activity in California moved south to Los Angeles.  (Which is ironic, given LA's equal risk of catastrophic earthquakes.)

Whether or not you're a catastrophe-buff, however, I'd strongly recommend A Crack in the Edge of the World.  Whether you like geology, history, personal accounts, or drama, it will keep you reading.  Winchester has a smooth narrative style and has obviously done his research.  The result is a book that will make you feel like you're there witnessing the events he's writing about -- as awful as that would have been.
Posted by Gordon Bonnet at 10:27 AM 2 comments: