Being a biology teacher, I'm understandably attracted to books from my chosen field.  I've read everything I can by Stephen Jay Gould, Richard Dawkins, E. O. Wilson, Lewis Thomas, Carl Zimmer, Jerry A. Coyne, Jared Diamond, and many others, and learned a tremendous amount both about biological science and also how to explain difficult concepts in an engaging manner.

It was in that spirit that I read last week Elizabeth Kolbert's wonderful book The Sixth Extinction: An Unnatural History.  I say "wonderful" because it is brilliantly written, nearly impossible to put down, and full of fascinating information (even with my background in evolutionary biology, I learned a great deal from reading it).  But if you decide to read it -- and I in no way want to discourage you from doing so -- be prepared for the fact that it's a seriously depressing book. 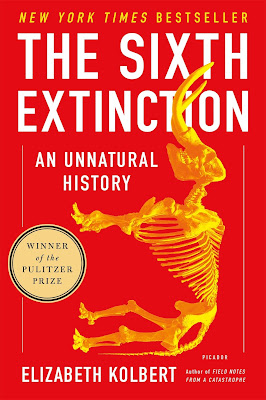 The premise of The Sixth Extinction is that we are now in the midst of the sixth mass extinction event the Earth has experienced -- the first five coming at the end of the Ordovician Period, the end of the Devonian Period, the junction between the Permian and Triassic Periods (this one the largest of all; by some estimates, 90% of life on Earth was extinguished), the late Triassic Period, and the end of the Cretaceous Period (this is the one that took out all of the dinosaurs except for the lineage that led to modern birds).  But, Kolbert shows, all of those events -- so sensationalized in kids' books on ancient life -- can obscure the fact that right here, right now, we are in the middle of another one, one in which the rate of species loss is something like 10,000 times the background rate of extinction.

The reason, of course, is us.  Some of the things we've done fall into the "how could you not have known better?" department -- overhunting, clear-cutting the rain forest, ignoring (or actively denying) the reality of climate change.  Others, such as the mere fact of our mobility causing the accidental spread of noxious exotic species, are less blameworthy.  (In fact, it's our around-the-globe-in-less-than-24-hours capabilities that seem to be what has caused the spread of chytrid fungi, currently wiping out amphibian species at a horrifying rate all over Central and South America.)

Kolbert, of course, ends with the question, "But what can we do?" and comes to the dismal conclusion of "honestly, probably not much."  Our sheer numbers preclude any serious notion of halting what we're doing to the natural world.  But knowledge is power; we owe it to ourselves at least to be cognizant of the effects our actions have.  Reading The Sixth Extinction might be painful at times, but refusing to turn our eyes that way is to ignore the reality of the world we live in.
Posted by Gordon Bonnet at 9:02 AM No comments:

I've been known at times to get suckered by a book that has an interesting title or cover even if I know nothing else about it.

Sometimes it pays off, sometimes it doesn't.  I was grabbed by both in the case of Wu Ming-Yi's The Man With the Compound Eyes, and it turned out to be a weird stream-of-consciousness story that went absolutely nowhere.  On the other hand, I absolutely loved Mohammed Hanif's A Case of Exploding Mangoes, which reads like an updated Catch-22 set in Pakistan under General Zia Ul-Haq.

My most recent purchase based on a title was Christopher Morley's The Haunted Bookshop, which I found in a used bookstore.  I looked at the first pages, and it seemed well written, and (of course) the title intrigued me.  So I bought it. I was disappointed when I found out that the bookshop of the title isn't haunted in the conventional sense; it's "haunted by the spirits of long-dead authors" because its owner is such a devoted bibliophile.  I had a moment's hope that it would turn out to be a real haunting (so to speak) when a copy of Thomas Carlyle's The Speeches of Oliver Cromwell keeps vanishing and reappearing, but the explanation turns out to be have nothing to do with ghosts (literal or figurative).

On the other hand, the story is a nice, sentimental walk through 1920s nostalgia -- a genteel New York City replete with neighborhood pubs and pharmacies and tobacconists (and man, Morley's male characters do love their tobacco).  The plot line is a little on the far-fetched side -- and I won't spoil it by telling you why the Carlyle book keeps disappearing -- but actually, it's no more contrived than many a tale by my beloved Agatha Christie.  It's engagingly written and has wonderfully-drawn characters, including a female character whose forthrightness and spirit was highly unusual in books of that vintage.

In sum, it's a fun, easy-reading period piece.  Morley tells a clever tale of New York between the World Wars, not as overwrought as The Great Gatsby nor as repressed and unhappy as Ragtime.  It's a nice diversion into a simpler time, and I did enjoy it, even if I was disappointed in my quest for a good ghost story.
Posted by Gordon Bonnet at 4:41 PM No comments: