I've been known at times to get suckered by a book that has an interesting title or cover even if I know nothing else about it.

Sometimes it pays off, sometimes it doesn't.  I was grabbed by both in the case of Wu Ming-Yi's The Man With the Compound Eyes, and it turned out to be a weird stream-of-consciousness story that went absolutely nowhere.  On the other hand, I absolutely loved Mohammed Hanif's A Case of Exploding Mangoes, which reads like an updated Catch-22 set in Pakistan under General Zia Ul-Haq.

My most recent purchase based on a title was Christopher Morley's The Haunted Bookshop, which I found in a used bookstore.  I looked at the first pages, and it seemed well written, and (of course) the title intrigued me.  So I bought it. 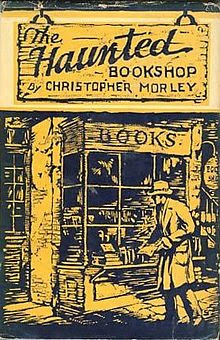 I was disappointed when I found out that the bookshop of the title isn't haunted in the conventional sense; it's "haunted by the spirits of long-dead authors" because its owner is such a devoted bibliophile.  I had a moment's hope that it would turn out to be a real haunting (so to speak) when a copy of Thomas Carlyle's The Speeches of Oliver Cromwell keeps vanishing and reappearing, but the explanation turns out to be have nothing to do with ghosts (literal or figurative).

On the other hand, the story is a nice, sentimental walk through 1920s nostalgia -- a genteel New York City replete with neighborhood pubs and pharmacies and tobacconists (and man, Morley's male characters do love their tobacco).  The plot line is a little on the far-fetched side -- and I won't spoil it by telling you why the Carlyle book keeps disappearing -- but actually, it's no more contrived than many a tale by my beloved Agatha Christie.  It's engagingly written and has wonderfully-drawn characters, including a female character whose forthrightness and spirit was highly unusual in books of that vintage.

In sum, it's a fun, easy-reading period piece.  Morley tells a clever tale of New York between the World Wars, not as overwrought as The Great Gatsby nor as repressed and unhappy as Ragtime.  It's a nice diversion into a simpler time, and I did enjoy it, even if I was disappointed in my quest for a good ghost story.
Posted by Gordon Bonnet at 4:41 PM