It's not often that I read a book which afterwards, if someone asked me "Did you like it?", my honest answer would be, "I have no idea."

That, however, would be my reaction should anyone ask me about William Least Heat-Moon's Celestial Mechanics.  It's an odd story -- about a writer named Silas Fortunato, his intensely unlikeable wife Dominique, her sister Celeste, and a peculiar neighbor named Kyzmyt whom I was never really convinced was real.

As far as what happened in the story... well, I'm not entirely sure about that, either.  Silas and his wife spend a lot of time sniping at each other (mostly her at him).  It's clear from about page 10 that she doesn't like him much, and Silas lost a good measure of my sympathy for him when for chapter after chapter he simply let her ridicule and insult and neglect him.  (And continued to try to persuade her to stay in the marriage, or at least in their house.)

Then Dominique takes off on a business trip, and sort of... vanishes.  In case you want to read it, and I actually hope some of you will, if for no other reason to see what your reaction is, I won't tell you the circumstances of her disappearance.  But I will say if you want things tied up at the end -- if you want anything tied up at the end -- don't get your hopes up too high. 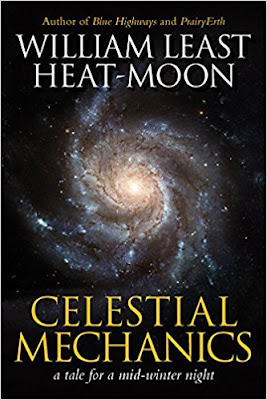 I don't mind a book that's mysterious and leaves you to fill in the missing pieces; I often write that way myself.  But in addition to Celestial Mechanics feeling like an incomplete (albeit long) story, there were two other things about it that really bugged me.

One is that there are no dialogue tags.  At all.  I know this is the current fad in novel writing, but c'mon.  Especially in the first half of the book, I lost track of the number of times I had to count backwards until I found a line of dialogue that gave me a clue as to who was talking.  I know that action phrases are better than "he said" and "she said" over and over again, but giving the reader nothing but the person's mere words to go on was pretty damned frustrating, especially given the second problem...

... which was that the characters, especially the four main characters, all sort of sounded alike.  They were erudite and glib, throwing around metaphors and literary allusions and puns and symbolism in virtually every line, only occasionally coming down out of the clouds to say something practical like "What would you like for dinner?"  (When Celeste, in response to some abstruse pronouncement by Silas, said, "I have no idea what you're talking about," I nearly cheered.)

It's a problem I have with the dialogue in a lot of television shows; after about five minutes, I'm scowling and saying, "No one really talks like that."  Nobody is that continuously clever, sardonic, and intellectual, 24/7/365.  In the case of Celestial Mechanics, it kept reminding me that I was reading fiction -- the absolute last thing you want your reader to experience.

So it was a mixed bag.  It had its intriguing moments; Dominique's repeated visions of what she thinks is the ghost of a child, Kyzmyt's peculiar witches' brews/teas, Celeste's kindness when Silas is recovering from an injury (and Celeste is far and away the most sympathetic character).  It's certainly smartly, and tightly, written.

But overall?  I can't say I liked it much.  It's a strange story about strange characters, and gives the reader little to hang on to.  All in all, Celestial Mechanics didn't really work for me.  Even as a writer of speculative fiction -- often involving the paranormal -- my main reaction is that it just didn't seem rooted enough in the real world for me to figure out what it was trying to say.
Posted by Gordon Bonnet at 9:07 AM