I'm a real fan of books that keep you guessing, so it is no great surprise that I read A. J. Aalto's latest book, Closet Full of Bones, in a single day.  If you've read any of her Marnie Baranuik series (beginning with the hilarious and madcap thrill-ride Touched), you might be surprised when you start reading her newest release, which is dark, understated, and as intricate as a labyrinth.

The novel centers on the siblings Gillian Hearth and Frankie Farmer, who are about as opposite as sisters can be.  Gillian is cautious, thoughtful, and loyal to a fault; Frankie is flighty, irresponsible, and trusting.  This has cast Gillian in the role of protector since they were children.  Gillian has always had to watch over her sister, protect her from the consequences of her own choices, and clean up the mess when the inevitable problems happen.

When they purchase a bed-and-breakfast together, Gillian hopes that this is a sign that Frankie's troubled past is over, that she will settle down into responsible adulthood.  But the past isn't going to let them go quite yet.  Trouble crops up in the shape of a jealous former boyfriend, Travis Freeman, and the response of the sisters to this unexpected complication starts them on a long downward spiral toward tragedy. 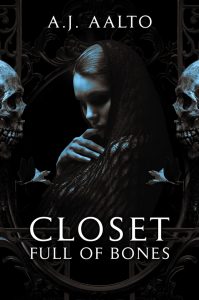 To give away anything more about the plot would be unfair -- this is not a book that anyone should have ruined for them by spoilers.  It's a shadowy puzzle-box of a story, centering on Gillian's determination that Frankie should be saved from herself.  It's about as different from Touched and its sequels as you can get, linked only by A. J. Aalto's tight, vivid writing and brilliant skill at drawing characters.  You will be thinking about this one long after you turn the last page.
Posted by Gordon Bonnet at 7:16 AM