I'm a huge fan of Christopher Moore.  His loopy, ribald plots and brilliantly funny use of language combine to create books that keep you saying "One more chapter..." until finally, sadly, you realize that you just turned the last page.  I think Coyote Blue, The Stupidest Angel, and (especially) A Dirty Job and its sequel Secondhand Souls, rank up there amongst the funniest books I've ever read -- but combine the humor with lovable characters that you really, really want to win in the end.

I read his novel Fool a couple of years ago -- it's a retelling of the tale of Shakespeare's King Lear from the point of view of the character of Lear's Fool, Pocket.  It has the usual Moore brilliance, and although it wouldn't show up in a list of my favorites, it's certainly a great story.

So it was with great anticipation that I picked up the sequel to Fool, The Serpent of Venice.

And this one, for me, did a total face plant. 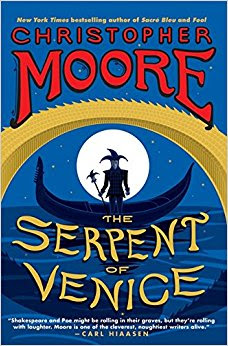 It's a mashup of a bunch of stories -- The Merchant of Venice, Othello, and Poe's The Cask of Amontillado amongst them -- and once again centers on Lear's Fool as the main character.  But the plot is such a chaotic jumble that it's hard even to give a clear description of what happens.  Pocket and his sidekicks, the giant Drool and his pet monkey Jeff, get into all sorts of hijinks and meet up with a whole host of characters both real and literary, but there's no coherent storyline to give it any kind of overarching sense.

It has its moments:

"Run along, love," Jessica said.  "It appears that Papa's been stricken with an apoplexy of the second person."

And this exchange between the villainous Iago and his wife, Emilia:


"Thou mendacious fuckweasel," said Emilia, almost spitting it, disgusted now rather than hysterical.

"Methinks the lady doth protest too much," said Iago.

So Moore's gift for belly-laugh-inducing dialogue is intact; it's more that that the story really doesn't ever come together.  Compared to tours de force of humorous speculative fiction like A Dirty Job and Secondhand Souls, The Serpent of Venice just kind of falls flat.

It's a shame.  It won't, of course, stop me from reading subsequent books of Christopher Moore's -- it's just that I know how much more he's capable of.  I was hoping for another twisty trip through Moore's labyrinthine mind, with hefty doses of shenanigans and heinous fuckery most foul -- and this one really didn't do it for me.
Posted by Gordon Bonnet at 4:29 PM No comments: