I first stumbled across essayist John McPhee's work because of my interest in rocks.

I was living in Washington State at the time, and took a class that gave me a rather eye-opening look at how complex the geology of the Pacific Coast is.  A friend asked if I'd read McPhee's quartet of books about the geology of the United States -- Rising from the Plains, Basin and Range, In Suspect Terrain, and Assembling California.  I hadn't, but I did, and I was hooked.

I continued to read his work, and found that the man has a way of making damn near any subject interesting.  I mean, for pete's sake, he wrote a book called Oranges, on the citrus industry in Florida and California.  He also wrote an entire book (The Founding Fish) on people who fish for American shad.  Both are fascinating, despite my being neither an orange grower nor a fisherman.

So I proceeded to get every book I could find by McPhee.

That was how I came to read last week his book Uncommon Carriers, about people who haul freight by truck, boat, air, and train.  As with all of McPhee's books, he focuses not only on the facts of the topic, but the people -- and, in fact, spends weeks traveling all over the United States, in a tanker truck, a coal train, and a Illinois River barge. 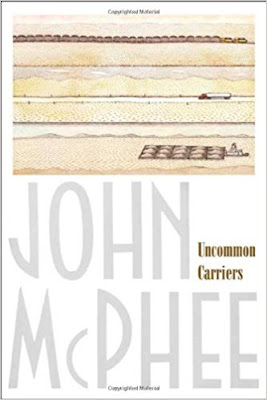 What it brought home to me is how much goes on behind the scenes to give us the lifestyle that we middle-class folks in the United States enjoy.  Few of us, when we pick up the can of WD-40 to oil a door hinge, think of the fact that the ubiquitous and helpful spray was (1) manufactured somewhere, and (2) carried across the country in a tanker truck.  Likewise for all the other commodities we have; unless you make a deliberate and concerted effort to buy local, everything you purchase, use, or consume took a ride on some sort of freight hauler.  It was brought to you by people who spend their entire lives moving things in large quantities from one place to another.

So once again, McPhee has taken a topic that few of us give a thought to, and shown us not only the details but the human side.  If you haven't read McPhee, you should.  His insight, wry sense of humor, and interest in the human condition make anything he writes a fascinating read.
Posted by Gordon Bonnet at 3:08 AM