If I haven't posted any reviews here in a while, I have an excuse; I've been caught up in Haruki Murakami's massive novel 1Q84, which at almost a thousand pages, is not something you can knock off in a day or two.

It's well worth the effort, though.  It's in his signature lucid but surreal style, where you're not always sure that what you're seeing (through the character's eyes) is real.  He has a way of describing the most ordinary, prosaic settings and making them seem otherworldly, places where you might expect to see ghosts. 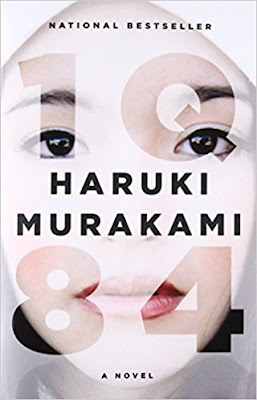 The book revolves around two characters: Tengo, a writer who just wants a quiet life but finds himself trapped in an increasingly violent vortex of conspiracy; and Aomame, a sports trainer by day, avenging angel by night, who does what she has to with dispassionate calm until the day she's given a job that will change her life forever.  The two of them had a chance connection in elementary school that neither of them has ever forgotten, and they have both spent the time since trying to find each other again -- at the same time, each not knowing if the other even remembered who they were.

Other characters slip in and out of the story.  The aging Dowager, who got Aomame started on her career of righteous revenge.  The misshapen, hulking Ushikawa, a gun-for-hire who will do anything he's told to do if given enough money.  Fuka-Eri, a teenager with a preternatural imagination.  The Dowager's bodyguard Tamaru, who is ruthless and efficient and has a soft spot for dogs.  Aomame's policewoman friend Ayumi.  The Leader, a desperately ill man in charge of a homicidal cult.  All of them play a part -- and the whole time, the two moons of the 1Q84 world hang in the sky, a reminder that all is not what it seems.

To tell you more would be to spoil the ride.  Murakami's ability to transport us to a side-slipped alternate universe, which he demonstrated over and over in such tours de force as Dance Dance Dance, The Wind-up Bird Chronicle, and A Wild Sheep Chase, is in full flower here.  Pick up a copy, fasten your seatbelt, and get ready for a trip you'll never forget.
Posted by Gordon Bonnet at 3:27 AM 1 comment:

If you liked the enigmatic Mr. Parsifal Snowe and his band of intrepid detectives in Poison the Well, get ready for a second installment of murder and psychic investigation with The Dead Letter Office, coming in April! 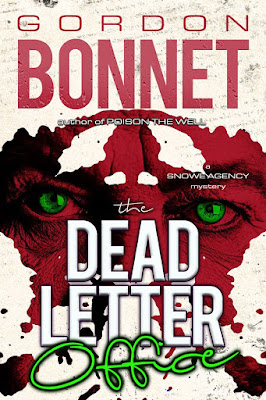 Crotchety, irritable, self-centered, rich Miss Annamae Dyer has been found clubbed to death in her study, and who had a reason to kill her?

From her conniving, scheming nephew Robert, who inherited most of her considerable fortune; to her nieces, cool, superior Katherine Yates and artsy, hot-tempered Marie Mackenzie, both mysteriously written out of Annamae's will; to her cousin, Donna Skelly, who has been put upon and abused by the whole family; to her cold-as-ice personal assistant Taylor Bradford -- none of them liked her.

In fact, none of them much liked each other, either.

In a family where every-man-for-himself is the watchword, and there's a cool couple of millions at stake, someone wanted the old lady out of the way.  But who... and why?

Find out in The Dead Letter Office.

Here's a short teaser from early in the story.  Enjoy!

“I have called you together this afternoon,” Mr. Parsifal Snowe said to his staff, “because I thought it might be worthwhile to bring together what we have currently uncovered regarding the death of Annamae Dyer. Recognizing, of course, that we have only recently begun the investigation, and anything we have is likely to be tentative.”
Seth stretched out his long legs and leaned back in the chair, which creaked slightly. “Are we starting from facts? Or from impressions? If it’s the latter, I’d say we have a pretty interesting bunch of personalities in this case.”
Mr. Snowe smiled beneficently at him. “I would argue that the two are inseparable. As I have commented before, cases are rarely solved by hard evidence alone. There is always the human angle—the feelings, the motives, the emotions. Those are critical, however contrary to logic that may seem. Let us begin, perhaps, with the two individuals that you and Ms. Hale interviewed—the deceased’s niece, Katherine Yates, and her personal assistant, Taylor Bradford.”
Seth nodded. “As far as the facts go, their stories jibed. Yates and Bradford both said Dyer was a heinous old bat—”
“—not in so many words,” Bethany interjected.
“Okay, I’m paraphrasing,” Seth admitted. “Yates’s actual words were something like, ‘Our family is an interesting bunch,’ but this was immediately after she basically said the old lady’s will had shafted everyone but her golden-boy nephew. She even used her will to deliver a posthumous smackdown to her other niece, Marie, I forget her last name.”
“Mackenzie,” Troy said.
“Right. And Yates said—about her own sister—‘not that it wasn’t deserved.’ I’d say Katherine Yates cares mostly about status, and keeping herself in control, but otherwise doesn’t have a lot of compassion.”
“Taylor Bradford said she was a social climber,” Bethany said, “and her husband was a bastard of the first water—”
“—not in so many words,” Seth said, with a smile.
“No,” Bethany said. “And to be fair, we didn’t meet the husband. Taylor Bradford had a great many opinions about everyone, and all of them negative, so I’m not sure how much weight to give them.” She paused. “He didn’t seem put off by what he got in the will, though. Seemed quite happy with his two grand and pile of old books.”
“Were the books valuable?” Jeff Kolnikoff asked, and five heads turned in some surprise toward him. Jeff cleared his throat, and mumbled, “I mean, I just wondered.”
“No, it’s an interesting question, Mr. Kolnikoff,” Mr. Snowe said. “And one I hadn’t considered.”
“Wouldn’t that be funny?” Seth grinned. “She wills some priceless book to her research assistant, and no one knows but the two of them. I can see someone like Taylor Bradford laughing up his sleeve about that.”
Posted by Gordon Bonnet at 12:55 PM No comments: