A couple of years ago I read Ava Norwood's first book, If I Make My Bed in Hell -- a gripping tale of a woman caught in a self-feeding cycle of religious indoctrination and abuse who finally decides she's had enough.  It's a gritty, dark, completely engrossing read, so when I heard that Norwood was working on her second book, I couldn't wait to read it.

That book, Poured Out Like Water, was released last week, and it far exceeded my already high expectations of Norwood's ability at story-craft.  It's the tale of Shannon Grady, scion of The Big Family In Town -- the child who never could compete with her brother and sister, and who never quite measured up to the high standards of her wealthy family. 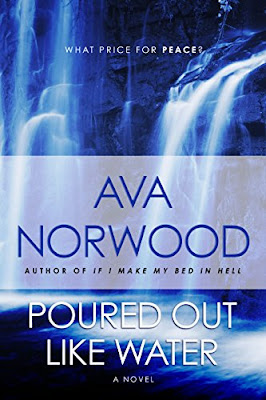 But the brash, influential Gradys have some skeletons in their own closet, and Shannon eventually sets aside her desire to be an accepted part of the family, choosing instead to create her own family circle, centered around her dear friend Evie.  And for a while, it seems to be working.

But the ghosts of the past are not so easily laid in their graves, and the members of the Grady family remain on a collision course with tragedy.  Some sins can never be atoned for -- and it's often the most vulnerable who end up paying the price.

Poured Out Like Water is a tour de force, drawing you along into the depths of family secrets, jealousy, anger, grief, and desire for revenge.  You won't be able to put it down.  And I can guarantee that once you turn the last page, you will be thinking about the story for a long, long time.
Posted by Gordon Bonnet at 4:10 PM