When I was given a copy of Victor LaValle's The Changeling, I thought it sounded right down my alley.

The story's main character, Apollo Kagwa, is the son of a Ugandan immigrant mother and an American father.  He is obsessed with books from youth, and grows up to become a rare book seller.  But there are some disturbing things in his past -- his father had a major breakdown and abandoned the family when Apollo was little, and Apollo is haunted by dreams of being picked up by his dad and brought out into a dense, suffocating fog.

So far, so good.  LaValle sets up a creepy atmosphere and a sense of foreboding pretty much from page one.  But when Kagwa marries Emma Valentine, and they have a baby, named Brian after Apollo's father, things take a turn for the grotesque -- and the book starts to flounder.  Emma kills their child (not a spoiler, as this much is mentioned in the back cover blurb) and flees, after claiming that Brian "was not a baby."  This launches Apollo on a long quest to find her, and either get her to explain, or else exact revenge. 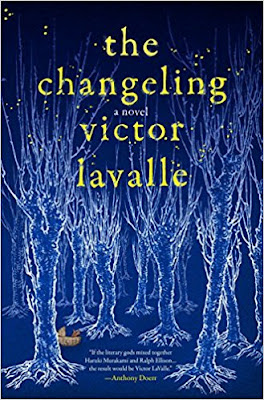 The story wanders around New York City, with Apollo meeting various odd characters in scenes that become more and more surreal.  The climax -- if you can call it that -- reveals not only where Emma is but why she did what she did, but the path there is so tortuous and gruesome that it wasn't worth the trip.  Also, the explanation is bizarre even by my standards, and left me turning the last page and simultaneously saying, "WTF?"

So unfortunately, LaValle's book did a bit of a face plant for me.  I stuck it out to the end, despite wanting to give it up more than once, but I'm not entirely sure why other than a hope that it would finally improve.  It turned out to be another example of a great concept, and execution that did not live up to its promise.
Posted by Gordon Bonnet at 1:21 PM No comments: