A teaser from "The Communion of Shadows"

Writing is a funny business.  Sometimes it seems like just getting a few pathetic little words on the page is a near impossibility, and sometimes it's close to effortless.  I had one of those lovely latter moments this morning, while working on my work-in-progress, The Communion of Shadows.  The story, set in rural Louisiana in 1850,  is about four friends, stuck inside during a thunderstorm, who have spent the night recounting their experiences with ghosts and the supernatural.  In this scene, one of them -- Leandre Naquin -- has just told the others that he is under a strange bargain his mother made with the Angel of Death, the upshot of which is that Leandre will only live until his thirtieth birthday.

Which is three days away. 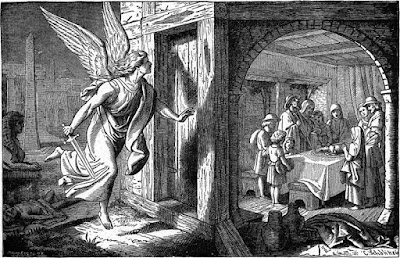 The three other men, understandably distressed, try to come to grips with the impending loss of their friend.  The following scene ensues.

Leandre shrugged.  “In any case, I didn’t mean to upset all of you.  But you can see why the subject of ghosts was on my mind.”  He stopped, listened for a moment, then got up and threw open the shutters of the single window.  “The thunderstorm seems like it’s moved off.”
A light breeze of rain-washed air relieved some of the stuffiness in the little room.  There was a distant, faint flash of lightning, and the deep roll of thunder was far behind it and almost too soft to hear.
“Always the question at night.”  J. P. gave his friend a smile.  “Leave the shutters open for the air, or close them because of the mosquitoes.”
“I’m voting for the air, at least for a little while.”  Leandre propped his hands on the sill and leaned out, looking into the darkness.  It could only be a couple of hours before sunrise, but there wasn’t even a hint of pearl in the eastern sky.
“Aren’t you scared?” came T-Joe’s voice from behind him, after a moment’s silence.
“Scared?  A little.”  He paused.  “It’s like when I was a child, and I used to climb an oak tree that leaned out over the bayou.  You’re there, hunched on the branch, nothing but the empty air between your naked body and the water’s surface. It looks like it’s a hundred feet down.  You think, ‘I can’t do it.  I can’t jump.’  Your hands cling to the branch, your heart is pounding, you’re dripping sweat.  You know once you jump it’ll be all right, you’ll swim to shore and in a moment be ready to do it again.  But in that instant, it seems impossible.”  He paused.  “I’m once again that skinny little boy in the tree, looking down at the bayou, and thinking I’ll never have the courage to leap.  I know I can do it, and that it’ll be okay.  Think of all the people who have passed these gates, endured whatever death is and gone on to what awaits us beyond this world.”  He turned around with a broad smile on his face.  “If they can do it, so can I.”
A stubborn note came into T-Joe’s voice.  “Even our Lord Jesus Christ asked that the cup be taken away from him.”
Leandre laughed.  “Very well, my friend, when the Angel of Death shows up, I will make certain to ask.  But I suspect I will meet with the same success that the Good Lord did.”

As far as what happens to Leandre and his friends afterward, you'll just have to read it when it comes out.  All I'll say is what a friend once commented about my books in general: "If you think you know what's going to happen, you're almost certainly wrong."