In an online fiction writers' group I belong to, we were discussing how to end chapters and entire stories.  Tie everything up with a neat bow?  Leave loose ends?  End on a cliffhanger?

I suppose we all have preferences, but I like the plot arc, even if a book is part of a series, to have some kind of closure.  My trilogy about the mysterious and terrifying Black-eyed Children, The Boundary Solution (Lines of Sight, Whistling in the Dark, and Fear No Colors), has an overall plot arc for the entire series, but each book wraps up at least a good chunk of what was driving the action, answering a lot of the questions that come up during the course of the story.  But the first two do leave some loose ends -- otherwise, why write a sequel?  (I won't go into a lot of detail because I'd like you to read the books themselves, so sorry for being coy.  I just don't like giving spoilers.) 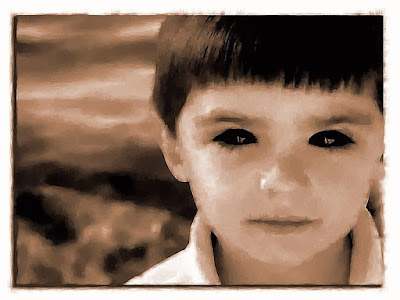 What about cliffhangers?  Well, for me, it depends on what you mean.  Those "OMG you can't stop here!" moments can work for a story, or completely piss off the reader, depending on how it's handled.  As an example of the former, consider the end of Tolkien's The Two Towers, the middle of the Lord of the Rings trilogy.  Remember the final paragraph?


The great doors slammed to.  Boom.  The bars of iron fell into place inside.  Clang.  The gate was shut.  Sam hurled himself against the bolted brazen plates and fell senseless to the ground.  He was out in the darkness.  Frodo was alive but taken by the Enemy.

The first time I read that book, I stared at that last sentence, and said, "Wait!  No!  What happened next?"...

... and immediately picked up The Return of the King.  (I have to admit to being pretty damn frustrated when I found out that the final book in the series jumps to what's happening to Pippin and Gandalf in Minas Tirith, and we have to wait until halfway through to find out what became of Frodo and Sam.  I mean, how horrible... leaving them there in the Orc stronghold all that time.  Sheesh.)

But as an incentive to go on, it worked brilliantly.

However, take one of the worst "let's piss off the reader" endings I've ever come across, in William Sleator's book The Duplicate.  (And I am going to give spoilers here... sorry about that, but I need to tell you the end to make a point.)

Now, I'll say up front I love most of Sleator's YA books.  Among the Dolls, House of Stairs, and Interstellar Pig are all absolutely brilliant, combining twisty, unexpected innovation with believable characters and a gripping writing style.  And I thought I'd feel that way about The Duplicate -- until the last line.

What Sleator did, in my opinion, was to create a cliffhanger the story didn't deserve.  The short version of what he did is that the main character, who has accidentally created duplicates of himself (who go on to create more duplicates, with horrifying results), has successfully dealt with all of the various copies -- or so the main characters and the reader think.  So on the last page the protagonist is there, having a celebratory snog-fest with his girlfriend on the sofa, and we think all is well.

"And then the phone rang."

That's the last line of the story.

No way to know.

So that's an undeserved cliffhanger, and one that didn't create a sense of suspense and a desire to know what came next, it created a sense of anger and a desire to hurl the book across the room.  (And no, he never wrote a sequel to it.)

It's not necessary to tie up every last thread.  Life isn't neat and tidy.  But if there's no sense of closure when you shut the back cover of the book, something has gone seriously wrong.

It's a balancing act sometimes, to create an ending that's ragged enough to be realistic and at the same time brings the plot and character arcs to a satisfying conclusion.  I hope I hit that balance most of the time.

Or at least don't piss you off enough to hurl the book across the room.
Posted by Gordon Bonnet at 6:36 AM