The book was The Last Templar by Raymond Khoury, and I really, really wanted to like it.  For one thing, it weaves together modern thriller elements with medieval European history, something that (when done well) is one of my favorite tropes.  (Just a few weeks ago, you may recall, I sang the praises of Ian Caldwell and Dustin Thomason's novel The Rule of Four, which does the same sort of thing, only does it well.)  And The Last Templar starts out with a bang; four horsemen, in armor with Templar insignia, raid the Metropolitan Museum of Art on the opening day of an exhibit of treasures from the Vatican, and steal a bunch of it -- including a mysterious machine called a "multi-geared rotor encoder." 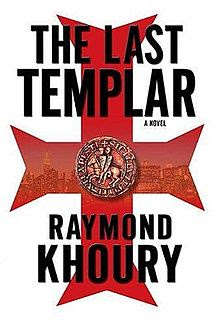 From there, however, it does a complete face plant.  Starting in chapter two, I began to notice some things that made me wonder how this manuscript survived the editing stage: a point-of-view that jumps around like a hyperactive kangaroo, sometimes in the same paragraph; overuse of turgid words like "stygian" and "vertiginous;" dialogue tags such as the following:

The latter gave me a flashback to my long-ago college Creative Writing professor, Dr. Bernice Webb, saying, "You don't 'wince' or 'smile' words!"

The problem is, bad editing isn't the only problem.  There are pages and pages (whole chapters, in fact) that are the author telling us historical backstory.  The dialogue and the narrative feature cheesy lines such as, "Reilly looked at her and smiled, and, at that very moment, he knew with utter certainty that he would spend the rest of his life with this woman."  (A thought, it must be noted, that occurred to Reilly while he and said woman were confronting a crazed murderer intent on killing them both.)

Worse, the characters are caricatures.  We have the beautiful divorcee archaeologist, trying to balance a career and caring for a child as a single mom.  We have the tough-yet-sensitive FBI man who we know from the moment of introduction is going to be the male love interest.  We have the has-been academic who has more or less gone crazy trying to reestablish his place in the world of scholarship.  Worst of all, we have the villain, a ninja priest who alternates pious talk with breaking people's fingers, and who was so obviously the bad guy right from the get-go that he might as well have worn a tag on his shirt saying, "Hello, My Name Is Father Evil McSatan," and who despite this gets to sit in on FBI meetings discussing the case.

And then said cast of characters start doing incredibly stupid and/or implausible things.  If there's one thing I hate, it's when I as a reader sit back and think, "Okay, there's no way that could happen."  It jerks me out of the story, reminds me that I'm reading fiction -- exactly what (as a writer) you wouldn't want.  And in The Last Templar, this happens every damn page.  Here is a short list of such events:
Okay, you get the picture.  This book makes Dan Brown's Angels and Demons sound plausible.  To quote the inimitable Dorothy Parker once again, "To call this plot wafer-thin would be an insult to wafer makers."

Want the kicker?  This book has been made into a made-for-TV miniseries, and was on the New York Times Bestseller List for 22 weeks.  This is the kind of thing that makes writers like me suspicious of how the whole big-name publishing industry works.  The fact that this poorly-edited, poorly-conceived, poorly-executed hash even got a contract in the first place is baffling, considering how many truly fine novels there are out there languishing in obscurity.

All right, enough with the screed.  I'm mostly mad at myself, honestly, for soldiering on for 523 pages to get to the ridiculous, contrived ending.  But I figure if I can warn one person away from making the same mistake I did, it's worth it.  At least the book was given to me -- I can't imagine how irritated I'd be if I'd paid $9 for a new paperback.  There are many better uses for $9, and in my opinion that includes using it to start a fire.
Posted by Gordon Bonnet at 3:53 AM No comments:

Knowing my interest in all things paranormal, a friend of mine recently gave me a copy of Christine Wicker's Lily Dale: The True Story of the Town that Talks to the Dead, about the village (not so far away from where I live, actually) that is completely populated by Spiritualists.  Founded 120 years ago, it is the longest continuously occupied Spiritualist community in the United States, and is the home to dozens of self-styled mediums.

As anyone who follows my other blog, Skeptophilia, knows, writing about the paranormal when you're a skeptic yourself can put you on a tightrope between sounding credulous and sounding scornful.  I don't always walk that line so skillfully myself -- I have a regrettable tendency toward scorn -- but Wicker does an admirable job of presenting the mediums she interviews as interesting, sane humans, not dupes nor charlatans nor loons.  In the interviews she presents here, she does her very best to be fair both to the people into whose homes she was welcomed, and to the general principles of skepticism. 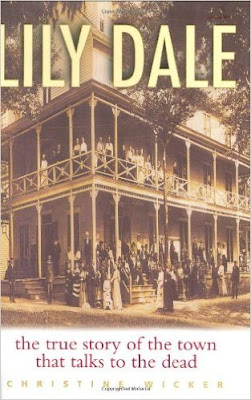 Interestingly, she is confronted over and over with the basic problem that most of us skeptics have with the paranormal; that it's unverifiable.  Like religion, evidence only gets you so far (in my opinion, not very far at all, actually), and after that, it becomes a matter of faith.  So if you don't have the faith to begin with, it becomes a frustrating matter of pulling yourself up by your own shoelaces -- which Wicker ultimately has to admit doesn't work for her.

So if you're hoping that reading Lily Dale will convince you of the truth of the afterlife, you'll come away disappointed.  Wicker meets a lot of faith-driven Spritualists in the little village -- and more than a few outright hoaxers.  But as an even-handed look at a community whose raison d'être is communicating with the spirits of the dead, it ranks right up there with Mary Roach's Spook as a thoughtful and entertaining read.
Posted by Gordon Bonnet at 5:36 AM No comments: 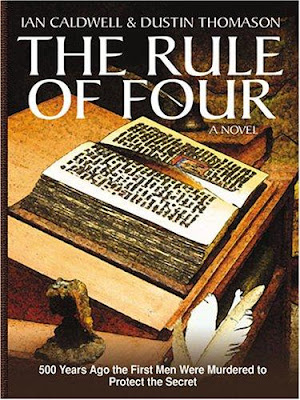 In any case, I now have a new contender for my Top Ten Novels list.  But enough about that.  Stop reading this, and go buy this book.  You will not regret it.
Posted by Gordon Bonnet at 5:41 PM No comments: