I'm a firm believer that good writing is good writing -- we each have our preferred genres to read, but a skilled writer can captivate readers no matter the subject or style.  The same is true with reading level -- I can think of some young adult books (Neil Gaiman's Coraline and Lloyd Alexander's The Chronicles of Prydain come to mind) that are as rich and enjoyable to the adult reader as they are to the young teenagers they're aimed toward.

Which explains why I zoomed through Sheryl Scarborough's debut novel, To Catch a Killer.  The story is about high schooler Erin Blake, who is faced every day with the fact of her life that will always set her apart -- the brutal murder of her mother when she was an infant.  In the small town where she lives, she will always be "That Girl," the one whose mom was killed by someone who is still on the loose. 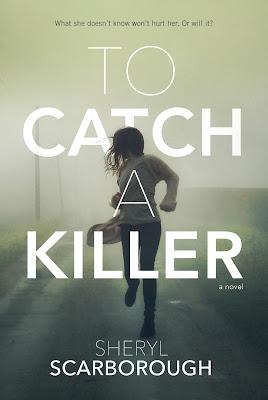 When a second murder occurs and facts point to the killer being the same one who had destroyed Erin's family sixteen years earlier, Erin and her two best friends Spam and Lysa, and her hoped-to-be boyfriend Journey Michaels, set themselves the task of catching the killer before Erin herself becomes the next victim.  It's a gripping thrill ride of a story, with strongly-drawn characters and a sympathetic protagonist who combines being a heck of a detective with being a real, down-to-earth teenager.  Her friends are equally well written -- not the cardboard-cutout extras one sometimes sees in young adult novels, but living, breathing characters we'd know if we met them in the corner Starbucks.

To Catch a Killer will appeal not only to young adults but to anyone who likes a good mystery and appreciates powerful, colorful writing.  Scarborough sets herself up for the possibility of sequels -- and all I can say is, I think she better be ready to make a series centering on Erin and her friends, because this one is going to bring readers in demanding for more.

[Note: To Catch a Killer is due for release on February 7 -- I was privileged enough to receive an advance copy.  It's available for preorder at the link provided above.]
Posted by Gordon Bonnet at 3:08 AM No comments:

A couple of days ago I finished reading P. N. Elrod's first installment of the (soon-to-be) series Her Majesty's Psychic Service, called The Hanged Man.  Set in a steampunk Victorian England -- where Victoria married a commoner instead of Prince Albert of Saxe-Coburg, women were given the vote, and the strong arm of the law was assisted by a band of intrepid psychics devoted to criminal investigation -- this story starts out with a vivid and fascinating alternate history as the setting. 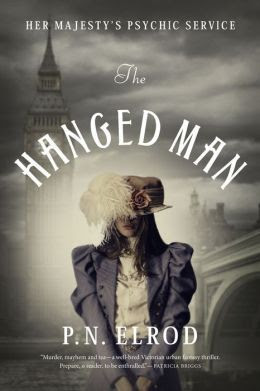 The main character, the young psychic "Reader" Alexandrina Pendlebury, is called out in the middle of a winter's night to do a reading on a dead body -- an elderly doctor who was found hanged.  When it becomes obvious that (1) the hanging was not a suicide, and (2) the victim was someone Alex knows -- to tell you more about that would be unfair -- she's caught up in a web of deceit, double-dealing, backstabbing, and people who aren't what they seem.  And if she doesn't figure out what's going on soon, there will be more than one corpse for the Psychic Service to contend with -- Alex's among them.

Along the way, we meet Alex's cousins, the wild Dr. James Fonteyn, the priggish Teddy Pendlebury, and her long-time rival, the sneering Andrina Pendlebury, who is one of Queen Victoria's ladies-in-waiting.  The story is rife with twists and turns, and the characters are wonderfully drawn.

If I have one criticism of the story, it's that the main character, Alex, is herself not very powerfully written.  I don't mean that she isn't tough -- she carries a gun, disdains the feminine society of the time, and isn't afraid of a good fight -- more that we never really get to know her all that well.  Revelations at the end of the book (which again I won't spoil for you) give us a bit more of a lens into her person, but I like to be given more, to feel as if I know (especially) the point-of-view character, that I understand what makes her tick.

I realize this is the first of what will (with luck) become a series, so I'm sure we'll see further development in her character, not least through what seems to be a budding romance with her partner-in-crime-solving, the dashing Lieutenant Brook.  And this is, truly, a minor criticism.  The book is a page-turner -- sharply written, occasionally laugh-out-loud funny, and with some interesting paranormal twists that even I, paranormal fiction writer that I am, was caught entirely off guard by.

So I look forward with great anticipation to Elrod's next installment.  She, and her protagonist Alex Pendlebury, are definitely off to a good start.
Posted by Gordon Bonnet at 1:34 PM No comments: