Another of my summer reads was a book given to me by a friend, who said, "This seems right in your wheelhouse."

The book was Dark Matter by Blake Crouch.  And she was right.  It's a mind-blowing ride through alternate universes, with assorted kidnappings, assaults, hair's breadth escapes, all with an underlying thread of quantum physics to hold it all together.

Here's the gist, or as much as I can give you and still avoid spoilers.

Jason Dessen is a relatively unknown professor of physics at a small college, but he gave up a promising career as a researcher for his girlfriend (eventually wife) and child.  His friends chided him for his decision; Jason is brilliant, they said, and with his creative mind and knowledge of science, he could make incredible contributions to the field.

Jason, however, is content with the lot he's chosen, and his life is placid and pleasant -- until the moment he's abducted by a masked assailant who refuses to give him any information about why he's been captured, where he's being taken, or who his captors are.

Forced at knifepoint to go to an abandoned warehouse, Jason is knocked over the head and injected with... something.  When he wakes up, he's surrounded by people who know him -- but to his astonishment, they treat him as if he was the genius research physicist he almost became. 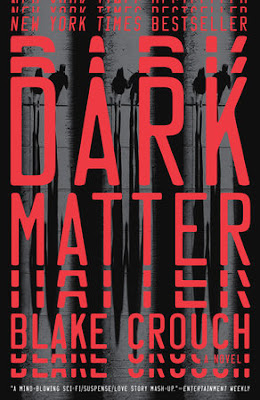 This is just the beginning, and believe me, it's only the beginning of Jason's troubles.  It's an exciting whirlwind of a book, although I have to deduct some Style Points because of Crouch's love for paragraphs made up of single sentences, often sentence fragments.  A lot of the book reads like this:

But he could hear them.

Okay, I exaggerate (slightly).  But it did begin to seem like a vocal tic after a while.  As a writer myself, I know how hard it is to avoid certain turns of phrase; my publisher still gives me grief for my love of the word "desiccated," which showed up in my book Sephirot several times (in my own defense, the book had two major scenes set in a desert).

But this seems like something an editor should have caught.

It's a little annoying.

But that's really a small criticism, and his book is well worth reading, especially for the Gordian Knot ending, which was masterful.  So if you want a mind-bender of a read, pick up a copy of Dark Matter.

And watch out for masked assailants.

They're everywhere.
Posted by Gordon Bonnet at 4:34 PM No comments: