Something I get asked a lot, and for which I have no particularly compelling answer, is "Where do your ideas come from?"

The most honest answer is "damned if I know."  Usually, something pops into my head completely unbidden, then I have to write the story to find out what it's all about.

Like what happened to me a couple of days ago.  My wife and I were vacationing in Cape May, New Jersey, chilling on the beach and enjoying the sunshine until Thursday, when we had to make the seven-hour drive back home.  It was while I was driving, and my wife was dozing in the passenger seat, that the following came to me.  I've cleaned up the wording a little, but it's substantially as it came to me:


Claver Road doesn't end.  It withers away.  First from potholed asphalt to dirt, then to a pair of parallel wheel-ruts, finally fading into a tangle of blackberry, osier, and scrub willow.  If you tried following it any farther, you'd soon find yourself lost in the deep forest.  The only paths there are deer trails, and those are few in number.  Even the animals shun those woods.  The whole place is sunk in silence, stillness, and shadow, where a whisper sounds like a shout, and any humans foolish enough to go that far make sure to leave before nightfall.

Okay, so where'd this come from, and what does it all mean?

I have no frickin' clue.  Even the name "Claver Road" came to me along with the rest of the description; there is, to my knowledge, no Claver Road anywhere near where I live.  I'm the least superstitious person around, but this sort of thing very much feels like I was struck by creative lightning, the images and words jolted into my brain from an outside source. 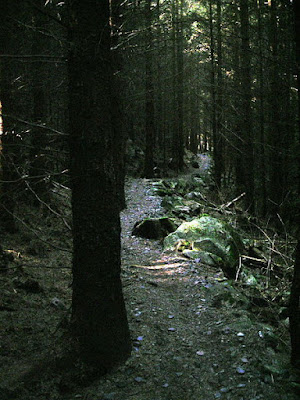 It has a Lovecraftian sound to it, though, doesn't it?  I'm certainly going to use it as the opening paragraph of a story of some sort, but whether short story, novella, or novel I have no idea.  My guess is it'll have something to do with a poor foolish unfortunate who went into the woods at the end of Claver Road and did stay past nightfall, but what happens thereafter, I guess I'll have to find out as I go.

And as far as what monsters live in this forest -- I'll probably be as surprised and terrified by them as my character is.
Posted by Gordon Bonnet at 12:52 PM 2 comments: