Excerpt of a work-in-progress: In the Midst of Lions

My current work-in-progress, In the Midst of Lions, is about an ordinary man trapped in extraordinary circumstances.  Caught in the middle of Seattle as the government collapses around him, he has to navigate his way to safety through a landscape he never imagined.  It might be safer away from the city -- that's his hope, anyway -- but he won't leave until he finds his beloved partner, who was separated from him at the beginning of the collapse.

This bit, at the end of chapter 1, has the main character (Soren Conover) talking to his older friend and coworker (Anderson Quaice) at the University of Washington.  I'm currently about halfway through writing the first draft, and I am hoping will be the first book in a trilogy.  Enjoy!

One long hand gave a contemptuous wave. “To hell with the citations. We’re not going to submit the paper anyhow.”

Soren goggled at him. “What do you mean, we’re not going to submit? We’ve been working on this for six months.”

“Pfft. By the time we could get it together, there’s gonna be no one to submit it to.”

“What are you talking about?”

“What rock have you been hiding under today?”

He swiveled his computer around so Soren could see the screen, and with a click of the mouse turned on the volume. There was a news report already in progress. A frightened-looking man wearing a headset mic was talking.

“… seems to have been coordinated. A group called the Lackland Liberation Authority has already taken responsibility. We’re not sure how many buildings have been burned and lives lost, and likely won’t know for some time, but there is chaos in Washington D.C., Boston, Chicago, Houston, Atlanta, Seattle, and Los Angeles. Reports of multiple assassination attempts against elected officials, some of them successful, are coming in from not only the United States but from several other nations. Confirmed dead in the U.S. are Governor Marcy Tate of Arizona, Governor Bob Delhomme of Louisiana, Governor Jason Goldschmidt of Maryland, Governor Andrew Wiedemann of Washington, Governor Mary Kurnow of Wisconsin…”

Soren stared at the screen. It felt like every drop of saliva in his mouth had dried up, and he wasn’t sure he could speak. When he did, his voice sounded thin, weak, almost alien in his own ears. “They killed him? They killed Andy Wiedemann? I thought… I thought he was negotiating with representatives of the Lacklanders, trying to redress some of their grievances, especially in eastern Washington…”

“Don’t you get it, Conover? The Lacklanders never wanted redress. That’s been obvious for a while. They just wanted enough time and opportunity to take it all down. They’ll burn the world to cinders even if it takes them with it.”

“How can we stop it?” As soon as the words were out of his mouth, he knew it was a ridiculous question.

The expected sardonic sneer from Quaice didn’t come. When he answered, his voice was thoughtful and a little sad. “No one can stop it. The opportunity to stop it closed twenty years ago.” Quaice glanced up at Soren, and gave a sharp shake of his head even though Soren had done nothing to contradict the older man. “No, I’m serious. The whole stage was set when the politicians started enacting legislation funneling money away from ordinary middle-class folks and into the hands of corporations. You can only tilt that so far before the whole thing collapses. They thought they could keep doing it forever, even after the Lackland movement formed and demanded change. They’d get richer and richer, and the money would keep them safe. They neglected two things—they were vastly outnumbered right from the beginning, and once you put a person in a position where he has nothing left to lose, you’ve created an enemy you can’t stop unless you kill him.”

Soren stood up suddenly, making the legs of the chair squawk on the tile floor. “I’ve got to get home.”

“How are you planning to do that?”

Quaice scowled and waved a hand in the air. “The Metro isn’t running. Got a notice from the University almost an hour ago. Don’t know why you didn’t see it.” 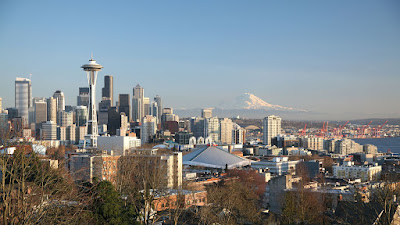 The old professor snorted. “To Ballard? The whole city hasn’t slipped into chaos yet, but it will before long. You do not want to be out on the street when that happens.” His voice softened. “Look, Conover, I live in Madison Park, just east of the Arboretum. Half hour walk, if that. You can come home with me and then figure out what to do from there. I’ve already told Cassandra Nicolaides and Gavin Liu to do the same. They’re in their offices gathering their things up. It might be a while before we’re back here.”

“But Finn…” He felt suddenly light-headed, disembodied, and he gasped out his boyfriend’s name again, unable to force out another word. He fumbled to pull his phone out of his pocket, and with a trembling hand turned it on. There were four text messages. The first was the one from the University administration that Dr. Quaice had referenced, letting employees know that the Metro wasn’t running until further notice. No explanation was given, just an adjuration to “find an alternate means of transport for any travel that is absolutely necessary.”

The second, third, and fourth were from Finn Donnelly. The first was timestamped a little over an hour ago. He must have written only minutes after Soren had turned his phone off. “I don’t know what the hell is happening, but there’s some kind of riot and it seems to be getting closer to the house. They’ve barricaded the street so I can’t use the car. Not sure if I should try fleeing on foot. Might have no choice.”

Only six minutes later, a shorter message. “Looks like running. Me & Janie Inoue. Not sure where we’ll go. They broke Janie’s windows but she got out through the back and climbed the fence.”

Beneath that were the words, “User currently offline.”

Posted by Gordon Bonnet at 12:41 PM No comments: